After Thunder recorded a new version of ‘Love Walked In’ in 2017, they found the process so refreshing and enjoyable, they wanted to try the same for other songs, and ended up recording a whole album of what they called ‘radical reworkings’ of songs from across their career, following that up with a tour. Both the album and tour were titled ‘Please Remain Seated’, which led the band to book seated venues for the tour, where the UK leg ended with a show at Symphony Hall.

Support on the tour came from Dan Reed, last seen on these shores taking the roof off several venues around the UK with the Network last November, though on this tour it was just him and his guitar. He came on unannounced, opened with ‘Only Love’ and proceeded to give us a typical Dan Reed solo set, filled with his solo work, some acoustic versions of Network songs and a fascinating cover. Of the Network songs, ‘Rainbow Child’ was obviously the song most well-known, but ‘Stronger Than Steel was also really well received, and his cover of Ronnie James Dio’s ‘Holy Diver’, along with the story of how the great man explained the lyrics when he and Dan met, must have been a surprise to those who hadn’t heard it before, but also went down really well. His own songs, including a majestic ‘Coming Up For Air,’ rounded the set off nicely and when he ended with ‘All My Love’, singing a capella, I’d like to think he’d made some new fans.

Robert Plant once described his ‘Unledded’ album with Jimmy Page as ‘old pictures in new frames’, which was a bit of an understated way to describe how radical some of their reworkings of the Zeppelin songs actually were, and to a lesser extent, Thunder have done the same thing to their own material on ‘Please Remain Seated’. It seems to have divided their fanbase, but nonetheless, Symphony Hall was pretty full for this gig, with only a few seats, in the very highest reaches of the hall, noticeably empty. It was a pretty low key start to the set, with only Danny Bowes and  Luke Morley on stage for the opening song, ‘Love Walked In’, with the rest of the band entering for the second song, ‘Stand Up’, and the band being further augmented for much of the rest of the set by their usual backing singers, Lara Smiles and Emily Lynn, as well as keyboard player Luke Tanner. There were other occasional variations from the theme, such as in ‘Future Train’, where Harry James played tablas while a sampled tanpura drone filled the spaces in the song, which actually did remind you of some of ‘Unledded’. 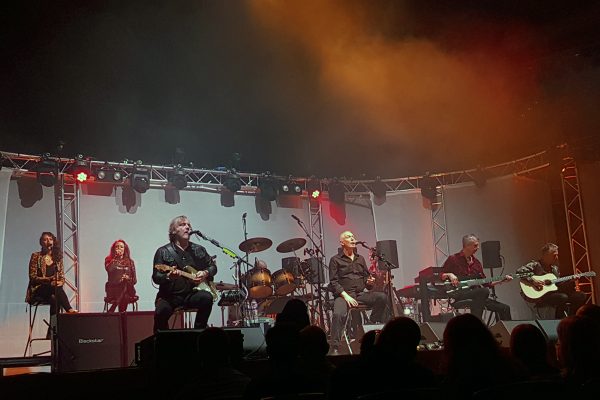 The reworkings of the songs weren’t entirely acoustic; both Ben Matthews and Luke Tanner added keyboards to some songs and, especially during the latter part of the set, Luke Morley produced a gold coloured electric guitar to play some bottle neck. Both band and audience did their best to stick to the ‘Remain Seated’ theme, although Danny Bowes did try to get the crowd to do a synchronised ‘wriggle’ in their seats early on in the set. It has to be said, though, that those who feared Thunder’s music wouldn’t transfer well into this kind of environment, were mostly proved wrong, as the crowd seemed totally bound up in the music for the whole show. Nor was the set entirely made up of songs from ‘Please Remain Seated’. As well as ‘Love Walked In’, the band also gave us a new version of ‘A Better Man’, and a sublime ‘Serpentine’, which closed the main set.

Whatever your opinion on the album, this was a fascinating and, for me, absorbing set. The two hours, including a lengthy four song encore, simply flew by; all the band played excellently, with special mention for Chris Childs, who did some fine work on the bass. I should also mention Danny Bowes, who, in a situation where he felt he had to rein in some of his usual on-stage exuberance, had a chance to show what a terrific blues-rock singer he is. The jury might still be out on the album, but there’s no doubt that it worked live, and it would be well worth doing again.