US grindcore standouts FULL OF HELL and England’s rising rock stars GREEN LUNG added to a stacked Damnation 2022 bill. They’ll be joined by Australian post-rock masters WE LOST THE SEA, who will make their UK debut at Manchester’s BEC Arena.
Green Lung, who were forced to pull out of this year’s event at the 11th hour due to covid, said: “We were gutted to miss Damnation 2021 because of thee plague, but being immediately invited back to be part of what promises to be Europe’s biggest indoor metal festival has gone a long way toward healing the wounds. See you next year Manchester. We go again!” 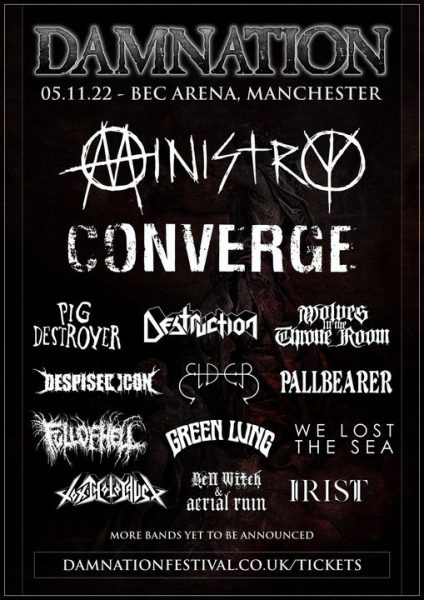 Organiser Gavin McInally said: “We really couldn’t have hoped for a better start to our ambitious arena venture; a third of tickets gone, securing the cancelled headliners in Pig Destroyer and Wolves in the Throne Room, landing Ministry and Converge to top a fresh bill and now adding three stunningly diverse acts in Full of Hell, Green Lung and We Lost the Sea.
“Full of Hell are the epitome of a Damnation band; raw energy, brutality and filthy grind and we’re delighted to finally have them join us. Green Lung’s late cancellation was a tough pill to swallow but with hindsight maybe it worked out for the best as they’d have filled the Eyesore Merch Stage three times over. As for We Lost the Sea, there will be no one in BEC Arena more eager to witness their post-rock masterclass than us. It’s a genuine pleasure to have them make their UK debut at Damnation.”
He added: “I’m not sure there’s another event on the planet with Ministry, Despised Icon and We Lost the Sea on the same bill and there’s so much more to be added before we’re done. So please do us, yourselves and most importantly, your loved ones, a big favour and buy your tickets now so we can all enjoy a relaxing Christmas.”
Damnation 2022 will take place at BEC Arena, Manchester on Saturday, November 5, featuring Ministry, Converge, Pig Destroyer, Destruction, Wolves in the Throne Room, Despised Icon, Elder, Pallbearer, Full of Hell, Green Lung, We Lost the Sea, Toxic Holocaust, Bell Witch and Aerial Ruin collaboration Stygian Bough and Irist, with more bands to be added.
For tickets and further information click here.
Facebook