Rocket-fuelled Welsh lads THOSE DAMN CROWS blast into 2023, sharing the catchy, contemplative new single ‘See You Again’ from their forthcoming third album ‘Inhale/Exhale’. A ten-track collection of bona fide, modern rock bangers, ‘Inhale/Exhale’ is set for release worldwide on February 17th, 2023 via Earache Records. Sure to become a instant fan singalong favourite, ‘See You Again’ is released today and available now on all streaming platforms.

Frontman Shane Greenhall divulges, “‘When will I see you again?’ is the question I was silently asking our fans every day throughout the pandemic. When were we getting back on stage, doing what we do best? When do we get to play in front of our fans again and share those moments of connection through our shows like we have done for the past seven years? At the time there were literally no answers, no one knew, there was no way forward, our world as we knew it… stopped.

We were separated, we were all suffering, we were at a loss, some in more ways than one. Though like EVERYTHING, the situation was temporary; life again showing us how brutal and beautiful it can be while throwing us those valuable lessons – that nothing lasts forever, whether it’s good or bad and that the Crows, the fans, and all that our music stands for… continues to heal me.”

No strangers to getting the party started (Shane and drummer Ronnie hosted the 10pm-1am New Year’s Eve show on Planet Rock Radio last month) – THOSE DAMN CROWS have confirmed a series of pre-show instores before their headline dates next month, kicking off on album release day!

Get your album signed, meet the band, and see THOSE DAMN CROWS perform stripped-back acoustic versions of tracks from the new album (plus there’s one full electric show)! To guarantee your spot, pre-order the album from your local store here. There are limited places available with some dates already full so be quick!

Instores rack up as follows: 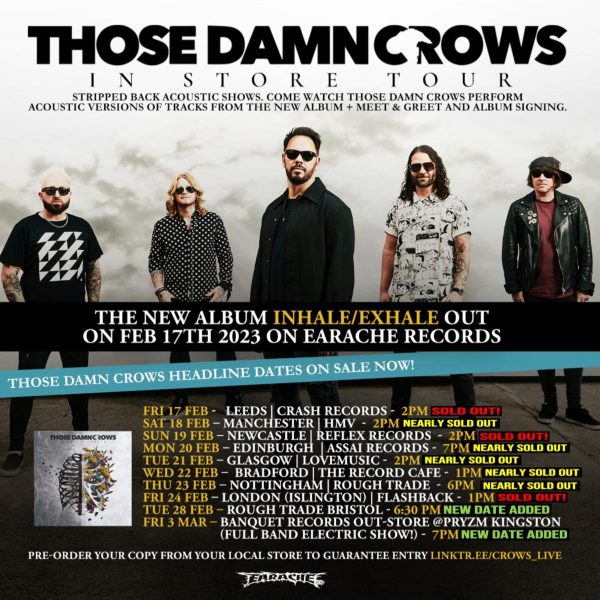