Propped in a boudoir doorway…

So this is what the elegantly dishevelled Guy Bailey is up to post Quireboys and Peckham Cowboys. Well let’s raise a glass to him because he may just (against all odds and common sense) have recorded the most gloriously dissolute rock and roll album of the year. Welcome back Mr.B!

Perhaps it’s passed you by but ‘Albatross’ is album no.2 from Thirsty…which pretty much consists of Bailey, a smattering of like minded musos and lyrics courtesy of Russian poet Irina D. Oh, and the not inconsiderable presence of Stones producer Chris Kimsey…about whom there will be more later.

So, yes, Stonesy, loose…as you’d expect. It makes Keef’s recent solo album seem positively Pro-Tooled. The title track sets the scene, a rock ‘n roll twang and some serious Phil Spector drums. Minimalist isn’t the word, Guy assuring us that “it’s alright” in his inimitable, tres fucked growl. A touch of banged out piano and a pitch perfect guitar solo and Bob’s your uncle, it worships at the Holy altar of RnR baby.

But make no mistake, this is Guys party. There are rockin’ tear ups and barstool laments. ‘Say It Ain’t So Joe’ has fiddles and femme fatales. The instrumentation is on point, perfectly picked and faultlessly placed. From woozy Hammond organ to distorted blues harp, it’s all low key but essential to the stories being told.

The whole thing has impeccable groove. Languid, fucked and sultry, it makes the Dogs D’Amour sound over rehearsed but, however drunkenly it may career around, it always manages to sound somehow perfect. Bailey’s solos have the history of rock ‘n roll coursing through their DNA. Sorry kids but this shit can’t be taught. It takes a lifetime of misspent years and dedication to a seriously decadent craft to sound this perfectly, effortlessly sloppy. Hats off to drummer Simon Hanson too, backing this simple and elemental can only be played by a genius. If Mo Tucker had played for Motown it would have sounded like this.

Indeed, the whole thing sounds kinda like the Velvet Underground covering The Stones. With lyrics by Bukowski. Or the Libertines raised on The Faces rather than The Clash. The bare bones riffs continue, ‘Va Banque’ has a lazy Stax/Otis groove while ‘Shore Of Light’ props itself in a boudoir doorway, floppy shirt undone and a bottle of red clutched in its mitt.

‘Cosmic Aphrodite’ rolls around in a pile of empty bottles and used needles, a happy union of poetry and music (which is rare) and a trippy Bowie/Floyd vibe. Finally the album nods out, Bailey sounding frazzled and frayed, about to faceplant the bar as last orders are called – but not before playing one last perfectly tailored, shambling solo.

Oh, and Mr. Kimsey? His contribution and knowledge and feel are invaluable to this. His ear can be heard in every single note, it’s the perfect combination of producer and material. This could and should have been a mess but he has crafted a 12 carat diamond. Old school, stubborn, scruffy, fucked up and taking elegantly wasted to new majestic new heights. A blinder. 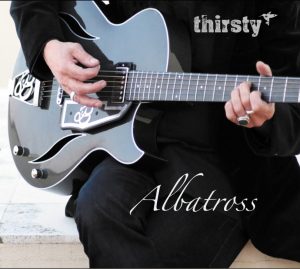