Ion turn up the heat

Paul Castles speaks with Third Ion’s Justin Bender (guitar/keys) and Dave Padden (vox) about their album Biolith – released July 8, via Glasstone Records – and finds out how and why former Annihilated frontman Dave has made the transition from thrash to prog with the Canadian crew.

MR: Hi fellas, and many thanks for talking to Midlands Rocks. I’ve been enjoying your forthcoming album Biolith but does it feel in some ways like you’re starting over with a new singer on board; Dave Padden having replaced Tyler Gilbert earlier this year?
Justin: That was my worry at first, but then I thought to myself that we are a new band anyway, so if we are going to have a major lineup change we may as well get it out of the way now. Luckily, this album was half recorded by the time our first album came out, so we were able to get a new album with Dave out quickly, without feeling like we rushed it.

MR: The band’s first album 13/8Bit earned lots of praise, so was it a bolt from the blue when Tyler decided things had run their course for him?
Justin: I’m sure it appeared that way, but to be honest I always kind of pressured Tyler to be in the band because I recorded a couple of his albums and loved his voice, but fronting a metal band just wasn’t much of a long term career goal for him. So it was a bummer, but not really a surprise.

MR: 13/8Bit was only released a year ago and you already have a follow-up out – Was that always the plan or was this prompted by the change of singer?
Justin: We started writing this album pretty much the second we finished mixing 13/8Bit, just because we were on a roll, writing wise. Perhaps this album would have been done a bit sooner had we not had to find a singer.

MR: You were working on the new material even before a new singer had been named. That must have been a little surreal?
Justin: Yeah, it was a bit different writing parts before knowing how they would sound, but a lot of it was written while Tyler was still in the band. I wrote all the lyrics anyway, so aside from a period of not know who’s voice would be on the record, I just carried on as usual.

MR: Dave is obviously very well known as the singer with Annihilator – so how has it felt taking over the mic with Third Ion?
Dave: It’s been really fun! It’s a big departure from what I usually did with Annihilator, and I have tons of creative control over my parts. Not to say I didn’t with Annihilator, but Jeff always has a vision and we compromised where we could. With Justin he was pretty much “dude, whatever, let’s try it, I’m sure I’ll like it!’. It’s also nice to exercise my clean singing more and play with melodies and harmonies over music that’s out of my comfort zone.

MR: Had you all known Dave for some time or did he just send you his CV!?
Dave: Mike and I have known each other for a while, since he and I played together with his brother Dave and Ryan Van Poederooyen in Terror Syndrome. It was Mike that brought me in.

MR: Just to confirm, Dave is now very much your permanent singer?
Justin: Yes, he is. We love having him, so far it’s been a fantastic experience!

MR: Dave, It was reported when you left Annihilator that one of the factors was that the travelling was starting to lose its appeal. If so, how does that sit with Third Ion tour plans?
Dave: Well, that was a VERY simplified version of things to keep from too much speculation and hearsay from fans and press. In reality, I was in a place where I needed to make some changes in my personal life and I needed to stop using the unpredictability of touring with Annihilator as an excuse not to commit to anything else. It was just time for me to move on. Jeff and I still send stupid texts and stuff all the time. Lots of farting, as per the Waters status quo ;) As for touring, it really comes down to how feasible it’s gonna be, and I’m pretty sure that goes for all of us. I’m not opposed, but I’m 40 and living in one of the most expensive cities in the world, it’s gotta be worth it ;)

MR: Dave, Third Ion obviously play a different brand of metal to Annihilator’s thrash. So has this new challenge in some way rekindled your fire for playing and performing?
Dave: It is very different, agreed! I was actually pretty intimidated at the beginning. I’ve never written music like this before. I’d done another project that was more melodic and proggy, but in that kinda Tool/DTB/Karnivool way. Much more straight ahead. Not to say I don’t completely get this style, I love it and understand it fully. But I have no idea how these guys come up with it from the ground up. They’re just wired different, haha! So, it’s been a real treat to experiment and try to keep up. In a way it’s almost like my meat and potatoes meets their 9 course meal halfway to create something that everyone can wrap their heads around and not be overwhelmed by the complexity of the music with a palatable hook to hang on to…I hope! Not to say they didn’t have that before, the first album was rad!

MR: For the rest of the band, do you feel the presence of Dave has generated even more interest in Third Ion?
Justin: Absolutely! Even just noticing comments sections on websites, being more active than in the past. People are interested and speculative, and then they see further that we have credentials like Into Eternity and Devin Townsend Band they are intrigued (and often surprised) at what we sound like. It seems like the European audience is already very familiar with him, so that should be a good thing for us.

MR: What tour plans have you got around the new album?
Justin: As Dave mentioned, we are all a bit more careful about what we do. We all understand being in bands requires sacrifices, but we are making an effort to be smart about those sacrifices, and not taking absolutely every offer that comes up. Also, with half the band living 20+ hours drive away from each other, we have to be as financially smart about touring as possible. So far all I can tell you about are our two shows, July 29 in Regina, SK and July 31 in Drumheller, AB (Loud As Hell V festival). Our winter plans aren’t ready to announce yet, but a brief Canadian run is in the works. 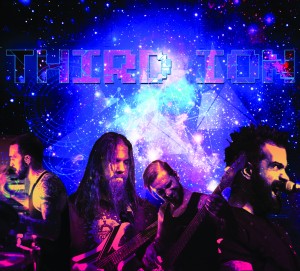 MR: There’s some inspired artwork going on here from Harley K at Necrographix – Just tell us a little about it?
Justin: Harley is actually my best friend, since we were teens. The artistic growth I have seen out of him in the past five years alone is astounding. He is an absolute monster at what he does. Early on in the inception of the band, Aaron, Mike and myself had some ideas about artwork and direction, but just vague stuff. Harley took our tiny suggestions and ran with them, and has created a couple of fantastic album covers, as well as at least a half dozen unreal T-shirt designs. Our merch is the best out of any band I have ever been in, I am extremely proud of his contribution. Also, once he got started on the first few things, we decided to adopt the character he created as a sort of “mascot” for the band, and we feature him on as much stuff as possible. He is on both album covers, but not the focal point of Biolith. Basically, we want him to be our Eddie!

MR: Third Ion draw on heavy subjects as science for their musical inspiration – does that mean you’re all chemistry and physics masters?
Justin: Not at all. LOL! In fact, I am a high school drop-out. I am extremely interested in it, though, and I watch science documentaries and listen to Neil Degrasse Tyson’s podcast every week. I’m not the most fluent academic, so I’m sure some of what I write about might even be straight up wrong because maybe I don’t fully understand physics, but I love space and science fiction, so I want to talk about it. We get into video game stuff a bit too, I am a coding hobbyist and hope to release a game soon.

MR: Finally fellas, I know you are also keen gamers – anything taking your fancy in particular at the moment?
Justin: I recently re-played Chrono Trigger, which I haven’t done in maybe 10 years. I still play Skyrim, but haven’t checked out Fallout 4 yet (Aaron has been playing that one). I’m a bit behind on the next gen systems, still, but I’ve played the new Doom and it is pretty amazing so far. Also, the nostalgia gamer in me is LOVING the new King’s Quest series. I wish someone would pick up where Sierra left off on all those classic Quest games.