“The best laid plans of mice and men often go awry…” Well said Mr.Burns, but you neglected to mention Who vocalists. Roger Daltrey’s initial plan for this year’s Who concert in aid of his beloved charity, The Teenage Cancer Trust, was for it to be a fully acoustic interpretation of their seminal rock opera, Tommy. But, with the deadline looming, they realised they didn’t have enough time to create and perform an interesting and varied set, and so, to avoid sounding, in Daltrey’s words, “like a bloody skiffle band”, they just decided to plug in and blast through the whole thing. And thank goodness, this is the Orrible ‘Oo after all.

However, this was still something of an event, the first time that The Who have ever performed Tommy in its entirety – previously 3 or 4 songs have always been dropped, even on their legendary 1969 Tommy tour when the Moon-era band were arguably at their peak. And so, with the weight of expectation and reputation on their collective shoulders, the augmented Who touring band of 2017 (do we really need 3 keyboard players?) hit the stage.

The Albert Hall is the perfect venue for this and the visual presentation is stunning, the huge back screen displaying beautiful visuals and animations in a style very similar to their 2014 live Quadrophenia shows. They get off to a respectful and powerful start, subdued compared to ’69, obviously, we can’t expect them to be the pill-crazed firebrands of yore (check out footage of their London Coliseum gig of the time – astonishing stuff).

Windmills and spinning mics appear during ‘Amazing Journey’ and the visuals really kick in during the instrumental ‘Sparks’. And they’re off, Townshend playing with venom. Even the somewhat dodgy ‘Fiddle About’ gets an airing, although Townshend does mention at the end of the show that, due to the subject matter, ‘Tommy’ isn’t the easiest thing for him to play, although he seemed to find it a somewhat cathartic experience.

The opening notes of ‘Pinball Wizard’ get the rousing reception you’d expect and the riff of ‘I’m Free’ is a welcome shot in the arm after the shorter, lesser known exposition songs but overall this holds together very well indeed. The focus is on the musicality, recreating the songs faithfully and accurately, doing justice to Townshend’s groundbreaking compositions. Finally we launch into ‘See Me, Feel Me’, a big powerchord finish and Townshend grinning at Daltrey and giving him a playful kick.

The short greatest hits set that follows has a celebratory feel after having paid their respects to Tommy. The band are let off the leash to fire off thunderous versions of their anthems. A scorching ‘Join Together’ and ‘Who Are You’ (replete with mucho Townshend guitar heroics) lead into the CSI one-two of ‘Baba O’Reilly’ and ‘Won’t Get Fooled Again’, the ageing frontmen clearly having a blast.

The evening was a triumph, the band were vital and engaged, Townshend playing with bite and feel and Daltrey’s pipes seem ageless (special mention must also go to Zak Starkey, who turns in a particularly momentous performance). And to top it all off, it’s beautifully staged and filmed. An essential package. 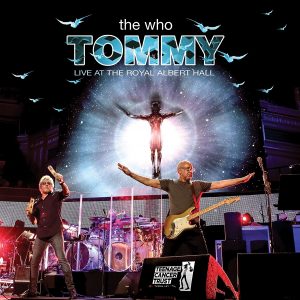