Hope I get old before I die…

There are no shortage of live audio and visual releases from The Who over the past decade or so, since the band was reduced to the line-up of just Pete Townsend and Roger Daltrey plus sessioneers. And so the question has to be asked so we really need another one? Well this 2004 performance from the Isle Of Wight Festival does have the historical significance of being their first appearance at the iconic festival since what has gone down in Who-history as a legendary set back in 1970. Added to the fact that this was their first gig on home soil since the passing of John Entwistle and there is a strong case to be made for this multi-format CD / DVD / Blu-Ray having been issued via Eagle Rock.

Backed by what are now regarded as long-time sidemen Simon Townshend (guitar), drummer Zak Starkey (drums) and Pino Palladino (bass), along with veteran keyboardist John “Rabbit” Bundrick, Daltrey and Townsend delivered a typically dramatic and powerful set that included 60’s singles such as ‘I Can’t Explain’ and ‘Substitute’ and 70’s rock anthems ‘Who Are You’ and ‘Won’t Get Fooled Again’ along with some deeper cuts and the regular selections from Tommy and Quadrophenia. What were at the time two new studio cuts, the wistful ‘Old Red Wine’ and the superb Elvis tribute ‘Real Good Looking Boy’ were also debuted to what appears to be a deliriously happy Isle Of Wight crowd.

Visually the show ticks all of the right boxes and much of the cameras attention is, naturally, focused on Townsend and Daltrey who serve up the obligatory windmills, power chords and twirling mic stands. Starkey also demonstrates what a superb drummer he has proven to be for The Who and he remains an integral part of their live sound in 2017. And whilst their 2004 show was never going to scale the heights of a 2a.m. start time in front of a crowd of 600,000 like 1970, The Who were still an impressive live act back in 2004, a reputation that continues to the present day. 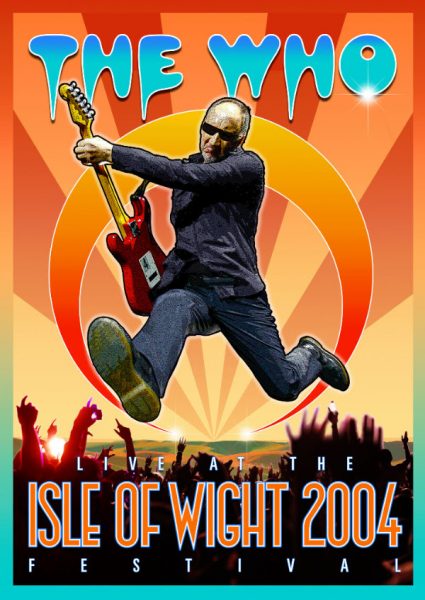