Throw-back classic rockers, The Temperance Movement are riding high on the back of their top 10 debut album and there appears to be a strong desire to ‘do it on their own terms’ as they headed out on another UK headline tour, a tour that easily sold out on the back of their well-deserved media coverage. No need for support slots here.
Their reach is apparent by the make-up of the Birmingham audience. Not many under 30 and plenty of couples and groups of friends, signifying the current earning potential of this style of music.

I was fortunate to have caught the band on their previous visit to Brum, in a rammed upstairs room of a pub in Kings Heath, no stage and the band playing just inches away. In what has been a meteoric last 12 months, that gig was still ‘early on’ in their career. Now a few months and plenty of gigs later the 5-piece return to the 2nd city and are suitably at home at a packed Academy2.

While a band like Rival Sons are all Californian retro chic, TTM have a quirky Britishness about them, geek-chic rather than ultra-cool. Frontman, Phil Cambell has discarded his earlier Joe Cocker-isms in favour of an ‘awkward Jagger’ vibe, all elbows and exuberance, dancing and jiving in his own little world. Bassist, Nick Fyffe, cleverly sits back allowing Phil and guitarists, Paul Sayer and Luke Potashnick, room to breathe, but when he does step forward it brings suitable impact (a bit like when Westlife used to rise from their stools!). It’s a subtle example that, although these boys are pure rock n’ soul there’s thought behind their craft.

We then have the advantage of them having only released the one album, which essentially means it gets played in its entirety. If you have that album (and be sure you do), you will know that it’s a breath of fresh air in this world of sanitised, auto-tuned, garbage that fills ‘NOW’ and ‘POP PARTY’ albums.

The live setting allows them to re-visit the running order a little and also extend a few with some delightful guitar jams between Paul and Luke. Phil’s voice has become suitably road-worn and sounds all the better for it.
Highlights are many, possibly all 12 songs in their own way, each of them old friends from, arguably, the album of the year, certainly the debut of the year.

I delight in the raucous rabble rousing throw-away ‘wah, oh-oh-o, woh-o-woh-o-woh-oh’ of ‘Take It Back’, while being swept up in the beauty of ‘Smouldering’ and the majesty of ‘Lovers and Fighters’. The ubiquitous midway lull was stylishly side-stepped with already-classic ‘Only Friend’ – the Brummie capacity crowd in full voice, while the 5-part harmonies during ‘Chinese Lanterns’ are always a joy and reek of quality. ‘Pride’, ‘Be Lucky’, ‘Midnight Black’ all vie to be top dog.
You get the picture. This is platinum hallmarked rock n soul of the highest order, perhaps not seen since The Black Crowes were Jealous Again back in 1990. 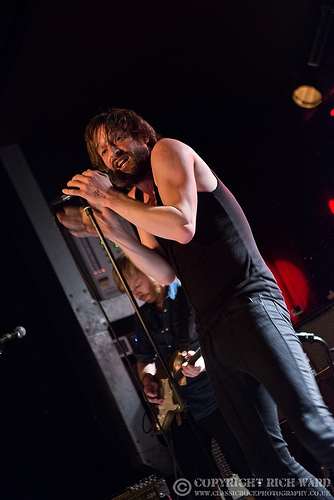