There are those who swear glam rock was ruined by too many bricklayers dressed in drag prancing round with guitars. While, I dug that Bowie could hold a tune and Bolan loved to boogie, this kid always considered the hod-carrying end of the market much more interesting; they not only stood  out from the more effete crowd but the best of the bunch really knew how to rock.

While Midlands loyalty will forever bind me to the might that was Slade in their day, Sweet were poised not far behind, and being better looking lads they attracted more female fans – An important factor when you’re a year shy of becoming a teenager with acne on its way.

Truth be told, it was Sweet B-sides that got me, they were able to crowbar the hard rocking complexities of Deep Purple into a three-minute throwaway those female fans rarely gave the time of day. Ah, but what hits on the other side of the turntable once songwriters Chinn & Chapman hardwired that ‘Wig Wam Bam’ drumbeat into a catchy tune, and as we rediscover on this collection the band themselves proved no slouches as songsmiths, applying a wider range of sonic sounds into the process once they hit their stride.

But, let’s face it, greatest hits get pumped out frequently. As a one-off they tend to be cheap, probably meaning the artists themselves don’t get much in financial return. The  idea of rerecording tracks might seem a good way to cut out the middleman publishing wise, but rarely works. Reimagining the songs, even less so.

If we accept Sweet recorded this album as a way of keeping the band in work during lockdown it at least ticks a box, but will it draw the right kind attention to a new look version of a band that those beyond diehard fans probably think of only in terms of Top Of The Pops appearances (if they’re old enough) or as reminder that they’re the band behind the fist-fighting ‘Ballroom Blitz’ that’s been meaty musical-fodder in a number of Hollywood films?

A crustier sounding synthesiser stirs into life than on the original version of ‘Fox On the Run’,  as if reawakening from a long sleep, cobwebs dusted one also notes the difference in drumming from Bruce Bisland, with a solid four-to-the-floor straight rock sound followed by feral vocals one totally didn’t expect, though the original line-up’s influence on the New Wave of Heavy Metal scene becomes immediately apparent here.

It’s undoubtedly former Cats In Space and Arena vocalist Paul Manzi’s throaty vocals  that those of us who’ve not been following Sweet’s various line-up changes closely since the late Brian Connelly left will ruminate and ponder over. He hits all the right notes, just with an unfamiliar voice. More so there’s a certain mate-y-ness to them, a character personality perhaps, whereas Connelly’s approach was more impersonal if not aloof.

When the vocal harmonies do kick in you know where you stand, there’s a comfy familiar warmth to them but the formula’s also been developed. It sounds like last man standing, guitarist Andy Scott takes the vocal spotlight lines Steve Priest did on the originals, leaving incoming bassist Lee Small to take the high notes and counter melodies.

Scott’s guitar enchants throughout, hitting that chunky-chopping funk sound that Niles Rogers would make a fortune with in Chic on the opening to ‘Set Me Free’ before giving Richie Blackmore a run for his money as he charges off in riff-rocking mode, and audibly scrapes his plectrum down the length of his strings during several old school pleasing moments on this record. A much-covered number, it’s the first time Sweet themselves has officially released it as a single.

As for the big guns, ‘Blockbuster’ still  repurposes Beck’s dirty riff for The Yardbirds’ ‘I’m A Man’ (as did Ronson on Bowie’s ‘Jean Genie’). Played a little straighter than the original, it still remains potent; the vocal chant-out a veritable platform boot wearing march to war. With ‘Hell Raiser’ however there’s a certain mocked-up approach, veering into ‘Monster Mash’ does Xmas karaoke rock territory, despite which Scott’s guitar hits hard. While ‘Ballroom Blitz’  stomps forth with rather proper voices from Manzi and Scott, giving it something of a tally-ho squadron leader approach, until lead vocals get deeper and dangerous-but-sultry before rocking out in harmony as it comes to a crashing end.

‘Teenage Rampage’ rocks heavy while the BBC banned ‘Turn It Down’ rocks and rolls. A revisited ‘Still Got the Rock’ of more recent vintage falls in the same ballpark.

From the more elaborate end of the market, Manzi sings ‘Action’ as a more personal theatrical threat, the airier keyboard string section contrasting with its heavier staccato sections. ‘Love Is Like Oxygen’ is sweeter (no pun) with a slightly different arrangement as chords strike down under lead vocals that are bluesy and more emotionally driven, the quieter musical sections quite dramatic, the overall affect something Meatloaf might cover.

Thus, most of these tracks are similar but different. Where Isolation Boulevard goes beyond the obvious is with Top 10 hit ‘The Six Teens’ and a version of ‘New York Groove’.

A sneering but sensuous lead vocal alongside  nigh-savage lead guitar plays amidst various melodies and harmonies interplaying on ‘The Six Teens’, but it’s the overall effect of the song that really grabs my attention – It’s like some wickedly wonderful punky mash-up audio-documentary wherein Mink Deville meet Abba strolling through West Side Story and a knife fight takes place! It moves into double time, proceeds to get even faster before climaxing on a high.

‘New York Groove’ apparently  originally featured on 2012’s New York Connection. I checked it out but this version surpasses it completely. It’s the old Hello hit that Kiss guitarist Ace Frehley covered on his debut solo album married to Jay-Z and Alicia Key’s ‘Empire State of Mind’. Here we get Scott applying the kind of chinking guitars Bowie featured when he went All-American as Manzi delivers the song as a weary-footed but enthusiastic travelogue akin to The Climax Blues Band’s ‘Could Get It Right’. However, much as that appeals to this old soak, it’s when  the absolutely wonderful deep soul delivery of Small’s voice on the ‘Empire’ bits come out of nowhere, thrilling this listener immensely.

Yes, these are stonking good runes, cheesy in places but often purposely so. If all this can prove is that you’ll get a good night out seeing Sweet live today it works, but; truth to tell, it goes way beyond that and bodes for well for future new recording by this particular grouping. 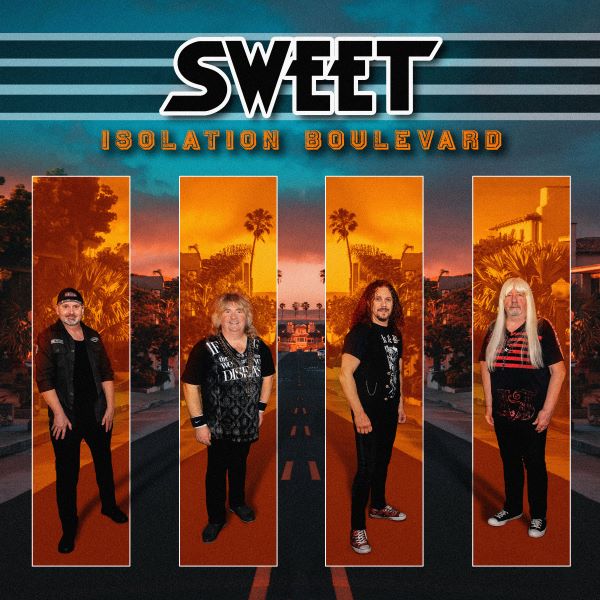