A year to the day (but one day out on the date) and The Stranglers are back in Birmingham. And yes, we’re very pleased to see them. The lights dim, ‘Waltzinblack’ begins, the crowd cheers. And when the band stroll on to the stage, the cheers and applause is loud. Very loud. ‘Tank’ and ‘I’ve Been Wild’ open the night and immediately, the band and the crowd are one, this 3,000+ capacity venue feeling like an intimate club gig. There’s not one person here who isn’t engaged. Even those at the bar waiting for drinks are now leaning on it, facing the stage and singing along.

With what now appear to be set staples ‘Peaches’, ‘Golden Brown’, ‘Always the Sun’ and ‘Hanging Around’ as well as closer ‘No More Heroes’ firmly in place and what constitutes the rest of tonight’s set, tonight’s selection makes for a belter of an evening. The Stranglers could easily sit in a set list of classics and never another track write, ever, but with the inclusion of a few tracks from the most recent albums, it’s obvious this mob has no need to rest on their laurels. ‘Relentless’ and ‘Unbroken’ are both a case in point, as is the rather splendid new song, ‘The Last Man On The Moon’. I know, “rather splendid” is not a phrase one would normally associate with this mob but there it is, for all eternity, lost to the depths of the shallows we call the internet…

Anyway, the line up is tight as ever, as is drummer Jim Macaulay, his presence very much welcomed as he does Jet Black and the band proud. Also tight is their humour, specifically in the inclusion of the tongue-in-cheek-probably-and-particularly-naughty-definitely ‘Bring On The Nubiles’, and in Baz’s question to those seated upstairs: “Have you bought your flasks and sandwiches? Who comes to a Stranglers gig and sits down?”. Baz can take comfort in the fact that should The Stranglers quit, he’ll have no problem getting a job as a Brummie impersonator. No, I’m not sure how much call there is for such a specialist – maybe as an extra in Peaky Blinders? – but he’ll no doubt be on the speed dial of many a casting director should it ever take off as a feasible career option. But in the meantime, there’s plenty strangling to do. Another great night. Same time next year? 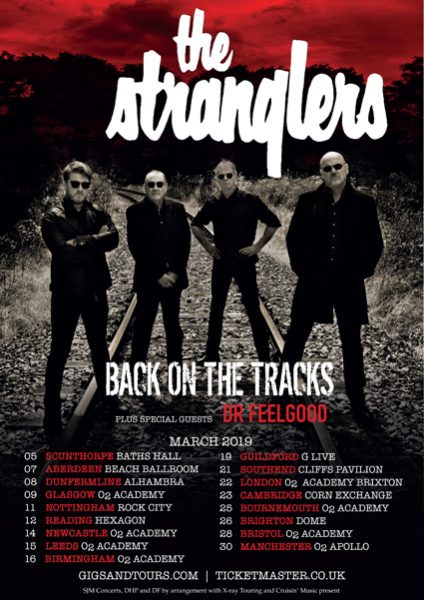