This album, you suspect, was a labour of love. The Sleep Eazys, in case you don’t know, are an instrumental band put together by none other than Joe Bonamassa. The band consists of Mr.B, his regular stellar touring band, a small horn section and a few extra faces to add colour.

The album itself? A definite detour from Bonamassa’s usual dusty Mississippi backroad. It’s entirely instrumental and definitely not his usual fare. It’s also a tribute to the late Danny Gattton, one of Bonamassa’s early mentors. Gatton blended a plethora of styles and genres to create what he called ‘redneck jazz’. This may give you an idea what to expect.

The album is also a nod of the head to names such as Link Wray, King Curtis and Tony Joe White. It’s a completely new sound for JB and he seems to be revelling in it. He also wears his producers hat for this album, for only the second time, previously having produced the debut album of Reese Wynans, his longtime keyboard player. And what a fine album that was.

We kick off with ‘Fun House’ (no, most definitely NOT The Stooges). It’s lively, light and loose with a big band sound. There’s a touch of lounge act to this…but in a good way. Bonamassa weighs in with a brief, angular, atypical solo about half way through.

And on it goes. ‘Move’ is Zappa-esque. It’s quirky, Hammond organ is way to the fore. Vibes add a jazzy feel although, overall, it’s almost a strange, alien form of easy listening! ‘Ace Of Spades’ (no, NOT Motorhead) wouldn’t be out of place on a Tarantino soundtrack – it’s mid 60’s surf rock. Bonamassa, you notice, is being very unobtrusive, this is a band album, showboating isn’t part of the deal here.

There are also a selection of interesting covers. The above Bond theme is a great cover of the John Barry OHMSS theme. It is, however, slightly uncharacteristic of the album – Bonamassa’s guitar is more to the fore. It is, however, brilliantly OTT.

We also get a full-on, Elvis-in-Vegas treatment of ‘Polk Salad Annie’ and, finally, a straightforward slow blues, effortlessly and (need it be said) brilliantly played. We wrap up with a faithful cover of Sinatra’s ‘It Was A Very Good Year’. It builds to a huge crescendo, strings and guitar soaring into the ether. A mournful, elegaic finale.

This is definitely not your average Joe Bonamassa album. It is, however, a supremely enjoyable one-off. It’s impeccably produced and played by a top-drawer cast. Bonamassa has rarely played better – taken out of his blue hued comfort zone, he plays with extraordinary imagination and daring. The joy oozes through every groove. Yes, maybe it does stray perilously close to lounge music, but it’s lounge music played by a band with a Cadillac full of Grammys. Enjoy.

Released on 10 April 2020 by Provogue Records 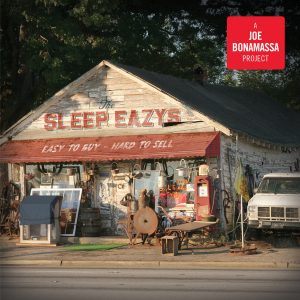