I first saw The Stones live on the Steel Wheels tour. I was too young to have seen them before and I remember the gig as being incredible. Their seven-year layoff had been their longest ever and the tour felt more like a reunion. The band’s latest ‘From The Vault’ release – one of the final shows of this tour from the Tokyo Dome – gives us a chance to re-evaluate…were they as good as I remember or was it just the thrill of actually getting to see the Stones? Were they smoke screening us with their legend? Was it all just smoke and mirrors?

…of which the stage had a lot! Indeed, it was the largest ever built at that time, a breath-taking Cecil B. DeMille construction. But would it be all show? However much we may love them we all know that The Stones are more than capable of phoning a gig in. They practically invented the art form! Hell, Alexander Graham Bell may have even invented the phone for them, Keith ‘n Ronnie playing rough approximations of the classics while Mick goes through the motions.

And initially that seems to be what we are going to get. It’s safe, proficient, corporate and flat. The band sit back while Jagger moves like…Jagger, wearing the bands own branded range of clothing (available right outside this auditorium folks). They play a worryingly tame version of ‘Bitch’ – one of their nastiest, funkiest numbers – incredibly slick compared to the coke crazed mania of last year’s 1975 LA Forum release. The horn section is drilled and rehearsed down to the last dance move, Bobby Keys must have been itching to tear it up like it was 1972.

Things seem to loosen up a little, the band rip into a concise, soulful ‘Miss You’, with Keith finally emerging from the shadows to groove – it’s perhaps the best rendition I’ve heard. A handful of new songs are (Steel) Wheeled out, including the brilliant ‘Mixed Emotions’, a powerful summation of Mick and Keith’s uneasy ceasefire.

With the new stuff having been efficiently dispatched its time for what everyone came for. And here we go, Keef effortlessly firing up the intro to ‘Honky Tonk Women’ while Jagger erm…plays with an enormous inflatable woman!
And then things get seriously good! Keith moves from a short blues jam into ‘Midnight Rambler’, it’s a damn near definitive version, bettered only in my opinion by 1969’s ‘Ya Ya’s’ take. Jagger reminds us that while yes, he can be a bit of a tart he is also one of the UK’s finest blues harp players. Keith by now is flying – Ronnie Wood (who is a surprisingly low key presence throughout) stops playing and eggs Keef on as a rhythm guitar masterclass unfolds…loudly. Showbiz is forgotten as The Human Riff loses himself in the moment and roars away, even allowing himself a smile as the song clatters to a finish.

Richards then has his obligatory two song moment in the spotlight. He was, at this time, in the process of transforming from a lawless, loose limbed human drug laboratory into a national treasure and is happily easing into his new role. Another high point emerges with a surprise rendition of ‘2000 Light Years From Home’, psychedelia oozing from Keith’s fingertips, he really was playing at an all-time high here, no blues staples rather nimble and surprising lead lines…no wonder Ronnie isn’t doing much. It is best to try to ignore Micks ‘unique’ interpretive dance moves though!

And then it’s hit after hit, the whole band firing on all cylinders – smoke, lights, pyro’s, the frontmen making use of every available walkway and platform to work the crowd. Special mention must be made of a fast, ragged ‘Satisfaction’ complete with Otis Redding Stax horns and Keith howling away on lead.
A final blast of ‘Jumpin’ Jack Flash’ (the band milking one of rocks greatest riffs for all it’s worth) and then it’s all over bar the fireworks. It really was a gig of two halves – Mick’s slick, big budget, nothing-left-to-chance first half and Keefs take no prisoners, fly by the seat of your pants finish. It’s clear watching this that he is the band’s leader and heartbeat, everyone follows his lead and his lead is sheer musical instinct, his antenna is on impeccable form.

So, I hadn’t been hoodwinked by the Mount Rushmore of rock – 1990 really was a VERY good year for the Stones – musically speaking one of their best. This is a triumphant performance and to anyone wondering if they need yet another Stones live dvd in their lives, the answer is a resounding yes! 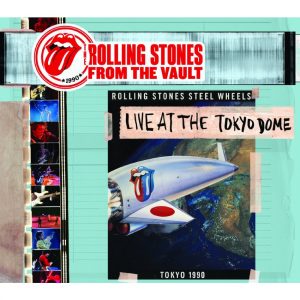