The Professionals, for those not in the know, were formed from the ashes of the Sex Pistols by guitarist Steve Jones and drummer, Paul Cook. They staggered around for a few years, released a darn good album of fairly straightforward boot boy rock and collapsed in a morass of drink, drugs, naivety and general stupidity (let’s face it, punk was many things but, with a few notable exceptions, smart was never one of them). But now, believe it or not, thirty years later, they’re back.

Well, almost. See, it’s like this. Steve Jones, guitar hero, celebrity tealeaf, vocalist and all round dude, is now a DJ in LA (if you’ve never listened to ‘Jonesy’s Jukebox’, please do – it’s a thing of wonder) and, understandably, seems to quite like things stateside. Cook and co. couldn’t quite convince him to give up the sunshine, sobriety, meditation and Harley friendly highways to come back to Laahndan to put the band back together. So, Cook recruited Tom Spencer to stand in and the chemistry clicked. Jonesy agreed to play guest guitar on three tracks which gave Cook a further idea…he decided to call in a few favours and bag a few more punk guitar slingers to appear on the album. ‘What In The World’ is the result.

Roping in the guest starts was a masterstroke, adding a sense of anticipation and variety to each track, spicing up what would have simply been an enjoyable if predictable punk album. It also takes the pressure off Spencer who, despite being a competent guitarist and gravel throated blokey singer, would have struggled to fill Jonesy’s boots, lacking as he does the latters amplified roar and vague sense of vulnerability.

So we get a rotating cast of punk faces – Jones is joined on his three tracks by The Cult’s Billy Duffy. Elsewhere we have Marco Pirroni (Adam & The Ants), Phil Collen, Duff McKagen and Chris McCormack of 3 Colours Red. It’s also a pleasure to hear Mick Jones (The Clash) emerge from exile to strap on a Gibson. However, the elephant in the room must be addressed again – everyone here tries their level best to sound like Jones – their own identities are somewhat lost as they peel off classic ‘Chuck Berry on uppers’ SJ solo’s amid the patented Sex Pistols chugging and powerchords. Only Collen injects a bit of his own Leps DNA and it’s his contributions that work best.

The album though, is still a triumph. Chock full of punk-o-rama riffs and terrace chanting. There’s no reinventing the wheel here – it’s a group of old punks doing what old punks do best and it’s a joy while it lasts. It’s a respectable ruckus and long may they continue now that momentum has been achieved. What we have here is an adrenaline blast of 3 minute, 3 chord gems, bristling with fire, attitude and, yes, bollocks. 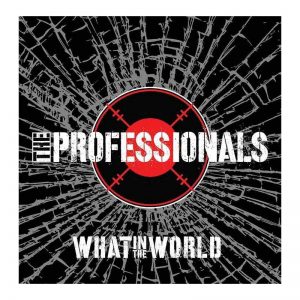