Should-know-betters and ne’er do wells…

Who would have thought it, The Mutants have made it to album number three and, remarkably, made it there with some considerable class. The Mutants – a motley rabble consisting of Chris Constantinou (Adam And The Ants), Space (sometime of The Prodigy), and The Damned’s very own Rat Scabies.

Their first album, ‘Rhythm And Punk Review’, was exactly what it said on the tin – aided and abbetted by such assorted ne’er do wells as Wayne Kramer, Wilko Johnson and Charlie Harper. They then decamped to Japan for ‘Tokyo Nights’, a collaboration with various big names in J-Punk. So, a modus operandi was beginning to establish itself…jet setting reprobates, scouring the globe for like-minded souls. An ethos was evolving. So, where next?

They headed for the hills… well, the desert. The Mojave Desert to be precise. Holing up in the infamous Rancho De La Luna studios in Joshua Tree, they plugged in and set about recruiting a suitably scuzzy cast of villains and characters (including most of The Dandy Warhols) to create an album of songs that blended in with their surroundings.

The title track kicks things off in fine, trippy style. Chris Goss, arguably the daddy of desert rock, lends his nous to a suitably sleepy, atmospheric tune, all stoner guitars and psyche keyboards. And that mood proliferates throughout the rest of the album. It’s obviously desert rock but with a garage punk edge. The songs are mostly short and punchy, the spirits of The Velvets, The Doors and The Stooges are definitely in the room. The riffs have a consistent trashy, bluesy swagger, ‘The Final Hand’ and ‘Lucky One’ have a dark Iggy vibe and sludgy blues harp underpinning everything – louche and effortlessly scuzzy with seriously cool, off-the-cuff solos.

The other notable collaborator is Sean Wheeler, who lends his manic, wired shriek to several tracks. Frazzled and on edge, he gives his songs that frisson of teetering on the brink, fucked up danger. His 2 spoken word songs sit at the centre of the album, holding it together… in a bug-eyed, Dennis Hopper crazy kind of way. Manic streams of consciousness that become increasingly unhinged and urgent, the pace increasing until he’s ranting and imploring a mysterious ‘Mary’ like some holy fool.

Elsewhere there is occasional jazz flute, Jim Morrison dusk-in-the-desert sexual menace wafting through the grooves, and instrumental rock outs that border on that edge… that edge that can’t be faked, that fine line where a song could go either way, it could be the coolest, baddest thing ever or it could come right off the rails and crash and burn, exploding like some doomed land speed record in the sun baked expanse.

The stoned, shattered chill out of ‘Distant Light’ concludes what may well be one of my albums of the year. Despite the amount of guests on this album it all holds together surprisingly well. Who knew this would be this good? Catchy, dark, a bit dangerous and pretty much summing up the term ‘outlaw’. Who knows where these outsiders will go next…staying off the grid, under the radar, keeping one step ahead of ‘The Man’ while fellow pirates jump aboard their caravan. Wherever it may be I know I’ll be onboard. 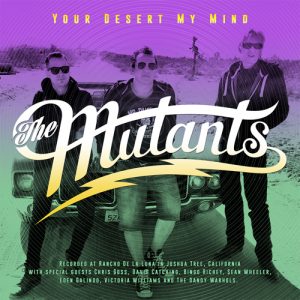