“Leaf Season” a grim fairytale recited to grown-ups to explain why trains take forever and why Malcolm Bruce, Kofy Baker and Will Johns are already tunnelling through ‘Politician’ as I enter tonight’s show. The guitar playing is gruff and taut save for sustained notes unleashed in solo, the bass playing naturally profound, drums underpin everything but crash and roll to demand attention when required.

Overhead on stage a screen relays a slide show featuring rare photos of the members of Cream in their youth, sometimes with their protégés, old film footage and a modern laptop psychedelic light show that accompanies the various spotlights spanning out towards the seated full house.

Below, Johns and Bruce stand either side of a double bass drum kit stamped with the name Kofy Baker on them (from the angle I’m standing at hands shift out indicating there’s a living creature residing within). Both are wearing hats and jackets (Bruce alone wears Rupert the Bear checked baggy trousers, whether as a 60s counter culture reference or his own unique take on sartorial elegance is not revealed) and they both sing. Wills with the more powerful range takes the lion’s share, reversing the parent band’s roles, while Bruce’s sweeter and higher pitch takes the more acid rock numbers, but it varies.

Pumping the bass line in for ‘Badge’, spicy fire is added via the guitar playing, the arpeggio turnaround throws in some unexpected curves, and the frontline both sing in the reprise section that only came to exist once Clapton went solo (as evidenced on his Rainbow Concert album), and, as Johns blasts away even harder on the outgoing solo it both familiar but enriched.

Bruce relates how when Cream first got together they had to quickly develop a set, so aside from laying covers there was a need to write their own material, with his mother Janet writing the lyrics for one of those first tunes, ‘Sleepy Time Time’ – Lithium lullaby downer blues overlooked on record, live with this line-up format it’s reinterpreted as a coy bedtime manners come-on. Oedipus complexes to one side Bruce lifts the number vocally, musically it drifts jazzily with blues guitar inflections, while joint call and response harmonies towards the end add some umpf.

Baker leads them in on ‘Deserted Cities of the Heart’, constantly inventive throughout while playing in an understated manner. Roaring collectively into jam mood they take out some of the blurrier psychedelics of the original bringing in more modern rock modal tones. Johns, who’s took lead vocals for this number walks across to Bruce, playing off against each other before once more Baker leads them into its power chord section while Beat Club footage above shows three white men with serious afro haircuts on screen.
A multimedia event, we not only get film and live music but many stories. They’re well spoken chaps, not a Glaswegian or cockney accent between ‘em. From Bruce the love is felt, off Johns – related by marriage – we get the cheekier anecdotes, and it’s to Baker we look for perspective. Rock’s original mad rock drummer being your father carries burdens as well as prestige, but the younger man affects such matters, for the most part, nobly. Old Ginger’s songwriting skills have long been castigated, but when Kofy introduces ‘Pressed Rat & Warthog’ I’m not the only one who’s over the moon.

Lysergic prog metal masquerading as weird anthropomorphic fairy tale, it trips in and out between pastoral jazz and hard rock with some frigging ace interplay between the trio, as Baker narrates the tale. It’s during this number I begin to notice Johns’ infrequent unique right hand mannerisms and how they affect his chord work. When over the song receives loud applause, and Baker nonchalantly tells us he asked his dad where the idea came from only to be told “I just wrote it one night on acid!” Personally, I remain of the opinion there’s a whole concept album wrapped up in that number that would give classic Genesis a run for its money.

Rainbows fill the screen as Johns sings ‘SWALBR ‘with some tasty twitching guitar licks jostled within this psychedelic busking rock. One completion they begin telling us about their recent US tour and how they’ve recorded a Six Of The Best live EP, the trouble is they begin talking over each other, and one’s not sure if a jokes taken badly as they leave the stage. However, rather than re-enacting their forefathers’ infamous personality clashes they’re here for the whole night without support, and they’ll be back for the second half in a bit. 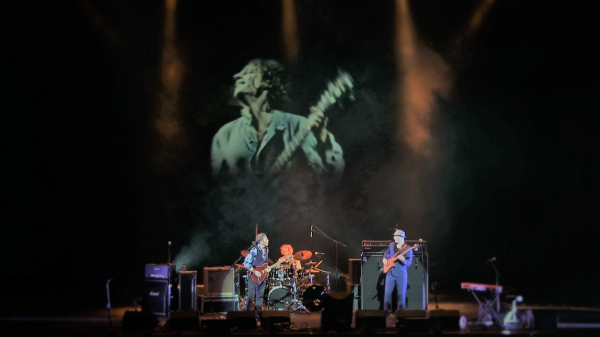 As I look about the audience is split 50/50 and not just couples. While there are indeed some old souls sitting here there are an amazing number of youths too, not all accompanying middle-aged parents. There is however a bloke in his mid 60s trying to impress two 30-40 year old women, telling them he supported Cream back in the day. Yeah, right.

The Music of Cream project has had its critics. Calling them a tribute band, and/or trading on their parents’ fame being the obvious ones. Few mention the music. The first half demonstrates they play those 50 year old songs well, but they do not slavishly copy them, and while the playing styles are familiar they are different too, having being exposed to other influences.
What they have taken wholesale is to imbue themselves with Cream’s original evolutionary and inspirational spirit. With the second half this will be more pronounced. Certainly Johns is ready for business, jacket and hat now removed, sleeves rolled up. ‘I’m so Glad’ is delivered watertight, harmonies buoyant, rocking in the blues before some exemplary progressive changes are cohesively delivered by the trio.

Johns tells us how when at Uncle Eric’s he’d wake up at the crack of dawn, put on some ZZ Top and play along on set of drums at 6 in the morning, only for Slowhand to come downstairs and ask him when he was going to learn to play a proper instrument. Cue laughs, with Baker joining in the reverie – All this edging us towards how he would only be taught to play the opening to ‘Crossroads’ and had to work out the rest himself.

As they do play it, there’s more of a boogie flavour, and one now notes that harder edged guitar sound Johns has is probably a Billy Gibbons influence. However, it’s not the song itself that draws my attention so much as the sudden appearance of women jiving away at the front of the stage, swiftly followed by more of them up and down the various aisles… And they’re mainly blond (though dare we hazard, highlighted via the application of a bottle)? It obviously inspires the guitarist as he begins jumping up and down and throwing poses when he solos. Males join the female throng dancing and applaud heartily at the end.

Bruce feeds us a funky subtle sexy bass groove for ‘Born Under A Bad Sign’. Johns makes his guitar squeal out at the high end when he solos, it move from blues to laid back rock before Baker kicks it about and they add a reggae section where the guitar gives it a dub echo psychedelic zing amidst interplay between the three getting ever beefier as a line of people down the front (males not shy now) sway in unison. “Good shit, man!” a woman calls out from the audience afterwards. They move effortlessly into ‘White Room’, Johns taking lead vocals, and seemingly dispensing with the wah-wah pedal on the song’s signature solo with it becoming a slow sweeping blues ingested piece before they change tempos and rock out.

“We’re going a blues that takes you down, then up, then down again” declares Bruce who sings ‘Sitting On Top Of The World’ as it indeed moves through such changes. He then tells us how when Cream formed Ginger Baker began writing with Peter Brown but that didn’t work and so sent him Jack’s way, but he then asked Janet Bruce to collaborate and that resulted in ‘Sweet Wine’. Once more, a song that’s aided by a fresh revision and modern technological lifting the tune taking it from meaty to snaking blues and shaking things up with some early Floyd like eerie rumbling. 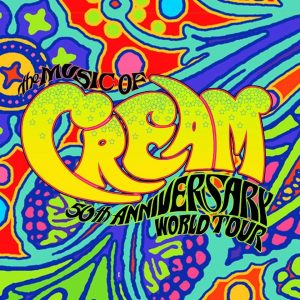 We’re told that there’s not time for Kofy’s seven hour drum solo but they’ll try and fit the four hour version in. “Go to the rest room now!” shouts out the drummer. But most of us do indeed stay for ‘Toad’. Ginger’s bearded grimace towers over his son as old footage shows him playing, and I have to admit there are only the barest sections I recall from the original, and yet this version keeps me listening – Maybe it’s that we’ve all become used to drum ‘n bass sounds booming out everywhere that to hear someone play all these different textures and counter patterns, makes that old musical joke redundant – subtleties are added , cowbells and hi-hats integrated building to a dancing jungle afro beat. Yes, it’s long and I wouldn’t want to sit it this every night, but tonight I’m genuinely listening and impressed, and as it comes to a conclusion charging like a herd of elephants hard and fast the applause shows everyone feels the same.

With jacket and hat back on, Johns seems to be indicating we’re coming towards closure. “A song close to my heart” says Bruce as they segue into ‘We’re Going Wrong’ with tympani drumming, ambient guitar and echoed vocals in tender gospel refrain and an extended bass solo that develops the melodies theme and goes places few other living bass guitarists could.
There is a surge to the front at the rallying call of ‘Sunshine of Your Love’ and the congregation do their scrapyard thing as with open arms above them young and old alike give praise and sing out loud “I’ve been waiting so long…” While we’re not talking the second coming here we are all celebrating. The crowd bays for an encore and Jones spirals his guitar through a series of spine-tingling runs acting as intro to ‘Spoonful’, the bass thunders and drums brush and countersign everything off both in approval and gentle directional persuasion. A jazz rock touch here a stomp and stop/start there and finally they climax…Goodbye!

Malcolm Bruce, Kofy Baker and Will John performed The Music of Cream. They’re not better than what came before. They are different. And in a positive way.