The Milkmen released their last album just as Covid was kicking in. Fingers crossed this, their fourth, won’t get buried under the comings and goings of prime ministers nor needy B-list royals and their film crews, and their upcoming UK tour will go as planned.

The album also features James Welch on Hammond organ, and was co-produced by Norsworthy with Wayne Proctor, of King King and Ben Poole acclaim, among others, so one should expect a good sound. From album title and track listing alone they’ve an apparent fondness for making a play on words, so things are promising that on playing the album through you might be left with a smile on your face.

There are ten tracks, and it leads off with ‘Driving It’. A car revs up, a bass pumps along and a rock ‘n roll number shifts nicely into gear with a vocal melody that’s not dissimilar to Mott’s It Takes One To Know One. Overall, it’s friendly and catchy. Again, it’s Green’s bass that initially draws attention on ‘Cheap Seats’, not by overplaying but just setting up the tune with vigour and bounce. A grooving rocker, not unlike Stretch or Climax Blues Band back in the 70s, Smy’s vocals a little grittier here as he delivers some nice lines.

‘Go Go Baby’ is party time rock with playful catchy lyrics and the need for some mini-skirted girls to be shaking their stuff to on any potential videos that might arise. ‘Adelaide’ comes as a surprise, acoustic strumming with melodic bass line, before electrics kick; if you like early Rod Stewart Smokie and/or the Sutherland Brothers & Quiver, you’ll no doubt enjoy this one.

A gentle wave of funky chords and emotive lead lines, warmly entice the listener on ‘How Do You Think I Feel?’ even before we get to the vocals that keep you transfixed on this sorry storyline. The rhythm section really groove on this one, and in an understated manner, even as it concludes with twin guitars weaving it towards climax; I’m sold hook, line and sinker on this one. ‘Sing The Blues’ is a weary-eyed slow number, Norsworthy again delivering some deft guitar tones throughout.

‘Gabba Gabba Hey’ maybe a tribute to The Ramones, but again I’m hearing the cheeky sounds of old Mott albums with a little Bowie on the sides. ‘Fabulous’ tips its hat to ZZ Top, but with a cleaner boogie sound, and an almost Beach Boys harmony section. It’s quite light and pleasant, in and of itself, but if it had been written back in the day and presented to a young solo Dave Lee Roth, it would be ripe for an over-the-top cover rendition. ‘Highway Woman‘ bites harder, riffing like Hendrix mixing it up with the original Jeff Beck Group, and it working rather well.

Final number ‘Bad Seed’ edges towards the epically intended. I read that we’re supposed to consider bands like Pink Floyd and Queen thematically on this one, well the former a little in terms of a more withdrawn vocal approach, but my ears suggest it’s more mulling about in Wishbone Ash territory.

I don’t think it was The Milkmen’s intention, but the overall impression I have of this record is that it captures that spirit of second-generation UK blues bands from the early 70s who began writing some catchy tunes and would end up having decent sized hit singles, that we’d now be remarking about dodgy haircuts and flyaway collar shirts on old Top of the Pops footage found on Youtube.

The overall vibe from Spin The Bottle is good tunes you can hum along to, with ‘How Do You Think I Feel?’ and ‘Highway Woman‘ proving to be standout tracks. 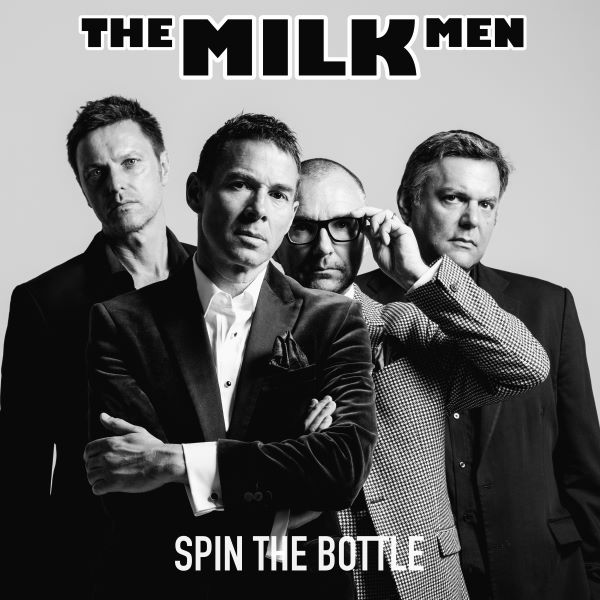