One accusation that cannot be aimed at Mike Ross is that he has been unproductive over the last few years. As well as releasing two albums with his collaboration with Troy Redfern and Jack J. Hutchinson, R.H.R.’s Mahogany Drift (2018) and Hotel Toledo (2019) he has put together two albums of remixed older material during 2021, Lay It Bare (from his previous band Taller Than) and Origin Story (containing material written while in the bands Afterglow, Mother Sugar & Taller Than). On top of that he has released no less than three Mike Ross Band, The Clovis Limit titles since 2019. The Americana flavoured The Clovis Limit – Part One in 2019 followed by Part Two which showed a more Southern Rock side to the band in 2020 then in 2021 the highly acclaimed Tennessee Transition taking cuts from those previous TCL albums and putting a solo/acoustic spin on them. On top of this there have been a number of download only live releases made available on his Bandcamp page during that same period.

With all this in mind, could things get any more peachy for the Brighton based songsmith? The answer is of course… Yes! 2022 sees the release of his latest work Peach Jam. His own comments on the album sum up the flavour and spirit of this latest predominantly instrumental five track album.

while still allowing me to express myself authentically and uniquely”

The Mike Ross Band of 2022 finds Ross joining forces with Derek Randall on Bass and Matt Slocum on Piano both from his The Clovis Limit – Part One team and Darren Lee on Drums and Rob Millis on organ from the Part Two iteration of the band. It was mixed and mastered at Electric Studio and Tonecan Studio in Brighton by Al Scott who carried out this same role on the Clovis Limit sessions.

The title track sets Ross’s sentiments in stone, despite its intro sounding like a recently discovered Jimi Hendrix Experience tune the almost fifteen minute track soon settles in to its smooth Allman Brothers characteristics which puts the jam vibe well and truly into ‘Peach Jam’. With Rob Millis’s Hammond chops and Darren Lee’s solid back beat front and centre it makes you wish you were a fly on the wall in the studio as the song cycles through its multiple moods taking in ambient, funk and psychedelia before returning to the southern roots which this epic journey hangs on. Next up and in total contrast the sub three minute ‘Grace’ gives an alternative side to both the band and the traditional song it is based on (Amazing Grace) as they take it in a more country direction reminiscent of ‘Take Me Home Country Road’ all be it draped in lush slide guitar. The opening to side two is its cornerstone track ‘Galadrielle’. A tribute to Duane Allmans daughter this track travels through four distinct movements where every jam band box is ticked from its twin lead guitar harmonies during the opening couple of minutes through Skynyrd style chugging lead/bass freak out and 60’s cosmic tape loop frenzy before returning to its origin. The only vocal track here finds Mike Ross taking to the microphone on a Fraser/Rodgers composition in the form of the Free’s Fire and Water track ‘Don’t Say You Love Me’. Ross’s vocal delivery sits very comfortably within the acoustic tones of this subtle blues ballad without taking it too far from its original sentiment. The most personal song on Peach Jam is closing track ‘Derek & Me’, a requiem to Mike’s departed father which closes out side two on a lazy sunny afternoon and is pure porch song blues.

Whether you are a fan of The Allman Brothers or not there is plenty of full on Americana/Southern rock joy to be had on this latest release and you should grab it soon as if history is anything to go by before you know it there will be more quality Mike Ross Band product hitting the webstores and download sites. Available from your favourite download platforms from 26th July or for those who like it physical why not head over to Mike Ross’s website (Mike Ross Music) to pick up Peach Jam on 12” clear vinyl, limited to just 150 copies which includes a stash of added goodies including keyrings, coasters and more. 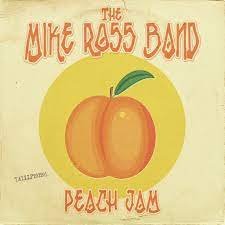