An evening with the heroes of the world…

Attended and observed by Jason Guest

“If you’re not into it, keep it to yourself.” These were Buzz’s words that opened the set the first time I saw (the) Melvins. The Geek Show Tour at the Metropolis in Fremantle, Australia, December 2003. Fantômas – Mike Patton, Trevor Dunn, Dave Lombardo, and Buzz Osbourne – opened the evening, their set a corpus of cool comic book cacophony and abrasive avant-garde arrangements. While the roadies set up ready for (the) Melvins, Patton stayed on stage and blasted the crowd with electronic noise, squeezing unearthly and unhuman sounds out of an array of gadgets and gizmos. Between this barrage and the intense closing set from Tomahawk – Patton, Duane Dennison, Kevin Rutmanis, and John Stanier – it was the turn of (the) Melvins to own the stage and own the audience.

At some point during the set, while (now ex-)bassist Kevin Rutmanis gyrated and grated his four string tool of groove, Dale Crover hammered and battered the kit and punctuated the grime, and Buzz wielded his guitar like a weapon and whisper-shouted his idiosyncratic lyrics, Trevor Dunn reappeared on stage, bare chested and brandishing a bottle of vodka which he quickly emptied down his throat before promptly passing out. Dunn the drunk could have easily stolen the show, but Buzz and co. took it in their stride, laughed it up with the tickled crowd and carried on. Can’t quite remember what happened to Dunn. Think he got dragged off by someone… Anyway, in 2006, when I saw them as part of the Fantômas Melvins Big Band at the Forum in London, it was the best of both worlds and along with the Geek Tour in Australia, it remains one of the best gigs I’ve ever been to. 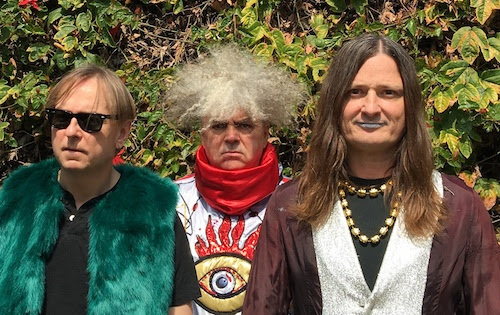 Nothing fazes (the) Melvins. That’s evident on all of their records. And when they get on stage, they really don’t care what you think. You’re there to see them, and see them you will. Whether you like it or not. And tonight, 10 years after I saw them last, nothing’s changed – and Buzz is still wearing a weird dress/poncho/onesie thing with eye-catching patterns on it.

Feedback and noise from Buzz, drum clatters and cymbal crashes from Crover, and adorned in a t-shirt sporting the sparkly Kiss-styled word ‘Bass’, Steven Shane McDonald (of Redd Kross) thunders in with the distorted, down-tuned, down-tempo drag of ‘Eye Flys’. Hypnotic and engulfing, (the) Melvins have us under their spell where they keep us for the next 80 minutes. Kiss’s ‘Deuce’ up next and McDonald not only sings but leads the way with plenty gravity-defying, legs-akimbo rock star jumps. ‘Queen’ and ‘The Kicking Machine’ shift the tempo and the temperature up a little and heads are steadily a-bobbin’ along to the mesmeric grooves.

A cover of a Kiss and of a Malfunkshun song (‘With Yo’ Heart, Not Yo’ Hands ‘) part of the set list, with a member of Redd Kross on stage it’d be rude not to play one of their tunes. And so, with the two-minute punk rock blast of ‘Frosted Flake’, a pit very quickly opens up and the crowd goes wild. While Alice Cooper’s ‘Halo of Flies’ gets an airing, so does a cover (sort of) of ‘The Bloated Pope’ from the exceptional Pigs of The Roman Empire album they made with Lustmord. ‘The Water Glass’ goes down a treat, as do ‘Onions Make the Milk Taste Bad’ and ‘A Growing Disgust, but it’s ‘The Decay of Lying’ from their latest release Basses Loaded (reviewed here) that gets one of the biggest responses of the evening. With the awesome line from the chorus – “We were like heroes of the world” – there was a tangibly jubilant oneness between the onstage champions and the devotees in attendance. Yep, King Buzzo and co. nailed it with that one.

And with ‘Night Goat’ from the classic Houdini album seguing into an a cappella version of the 1908 Tin Pan Alley song ‘Take Me Out to the Ball Game’ – with some marvellous three-part vocal harmonies from the crooning cronies – it’s one, two, three strikes, you’re out, at the old ball game. Three instruments, three vocalists – a band against a brick wall. 30+ years in and (the) Melvins are still much more than the sum of their parts. I did like it. And I shan’t be keeping it to myself.