To get a feel for what The Main Grains are about, you’re better off taking a look at the band’s logo than mainman Danny McCormack’s Wikipedia page. The obvious Ramones homage melded with sleaze-rock stars ‘n’ skulls imagery encapsulates the vibe of debut Don’t Believe Everything You Think far better than any ‘troubled rock star’ caricature could…although for the sake of completeness, a quick biog might be in order.

Danny: original Wildhearts bass player, in and out of that band throughout their heyday with drug problems and personality conflicts, occasionally surfacing with punk-edged outfits like The Yo-Yos before dropping off the radar again. Guitarists JJ (Spill Sixteen, Whiskey Haze) and Ben (Modern Day Dukes) plus drummer Ginna (PsychoBabylon, Phluid): recruited from the cream of the UK rock underground to form The Main Grains before rattling out the seven tracks under review in less than six months.

Up to speed? Good. Because the history doesn’t matter half so much as what the quartet have put out here, and the first three tracks had this reviewer grinning from ear to ear throughout. It’s not unfair to say that DBEYT pushes few boundaries musically, but the straight-ahead rock ‘n’ roll it embodies doesn’t need to; definitely more Yo-Yos than Wildhearts, the chorus hooks are hammered over in two or three minutes a tune, and there’s space found for a few well-placed Beach Boys ‘whoo-oohs’ in ‘Rather Be In California’.

There’s something of a mid-EP lull – slide-guitar-infused ‘Spend Your Money’ is pretty much a heavy blues by numbers, and as well-done as the cover of ‘Teenage Kicks’ is it’s not wholly necessary. Things are finished in fine style by the ‘Ramones-meet-Motorhead, take-loads-of-speed-and-jam-Status-Quo-numbers’ closer ‘She’s A Catch’ though, ensuring that Don’t Believe Everything You Think firmly passes the press-play-again test.

While falling slightly short of a full-on return to form, the fact that McCormack has returned to music at all (quite apart from having assembled such a high-calibre posse of musicians around him) is a very welcome one. Given a tour or two to fully gel The Main Grains could become one of the preeminent punk ‘n’ roll units the UK has to offer – the future’s hopefully Grainy. 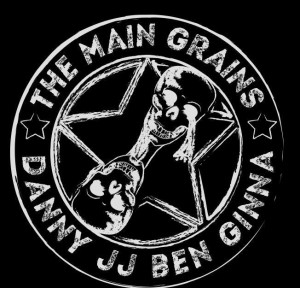