Two out of three ain’t bad…

Aussie four-piece The Lockhearts play both types of music…rock AND roll. And they do it well – they have the chops, the melodies and bucketloads of cool. And, being Antipodean, they don’t tend to overcomplicate things – they know what they like and that’s what they do.

This, being a debut album, has many debut album traits. There’s energy and attitude to spare. And there’s ambition, a desire to see and conquer the world – trains and stations are sung about a lot. New York, London, Paris, San Francisco, California, they all get a namecheck. They sing about leaving this town behind. Rock ‘n roll wanderlust abounds.

Oh, and influences. I may not have mentioned this but The Lockhearts love their rock ‘n roll and they want to play you all of their favourite songs. So, we have the ‘Whole Lotta Love’ meets ‘…Levee Breaks’ grease of opening track ‘Leatherface’. We also get snatches of Hendrix, Guns ‘n Roses, Oasis (and therefore The Beatles), Tom Petty, The Replacements and many, many more. And The Stones. Lots of The Stones. At times it feels like The Stones once removed, more akin to Primal Screams Glimmer Twins homages than the actual originals. Yes, they’re magpies but so what. Who, out of those aforementioned artists, wasn’t? And anyhoo, it’s not calculating or malicious, they’re fans.

And who’s to say The Lockhearts won’t be an influence themselves in years to come, this is a fine album. It’s all here – Zep funk, country acoustic, lazy Sunday strumalongs, howling slide and bluesy groove and a whole bunch of 3 minute rock nuggets.

Plus a few curveballs. The big distorted bass intro of ‘Polaroids’ leads into a pitch perfect big 80’s rock epic – its construction and production is spot on. Hell, there’s even a big key change. If this song was 30 years older it would have been in a John Hughes movie. Then we have the feelgood punk finale of ‘Xanax’- snotty guitar, handclaps and cowbell leading the charge in this rollicking ode to…urm, tranquilizers. Clever, joyous and an instant earworm.

So, all in all, a great debut. More than likely recorded in a small studio strewn with candles, scarves and empty bottles of Jack. Not much doom but plenty of fuzzy Americana and, hey, two out of three ain’t bad. 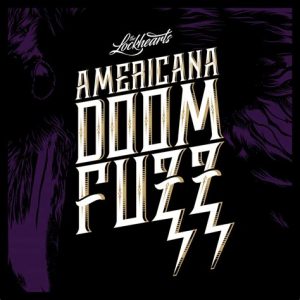