Formed in 1978 as an offshoot from legendary band Stackridge, The Korgis streamlined their progressive roots and birthed a more radio friendly (but equally intriguing) sound. Almost three decades since their last album they’ve returned with a fully realised concept record and Kartoon World, vast in scope, stands as a career best.

After a brief overture (with shades of Days Of Future Passed) things really kick up a gear with opener ‘Bringing Back The Spirit Of Love’. In four-and-a-half blissful minutes it succinctly encapsulates all that’s great about The Korgis; it’s luscious, warm and flows like a river of silk. Delicious harmonies nestle next to sublime melodies and float over a solid back beat. A balm to sooth our troubled times this could quite easily be The Beatles in ‘67 and The Korgis swing with a similar confidence. By way of a musical time machine ‘Back In The Eighties’ transports us to ‘87 with some suitably spiky synths and captures some of the vapidity of the Regan-era by referencing Madonna, Rubik’s Cubes and VCRs. On an album that’s constantly shifting gears ‘All Roads Lead To Rome’ takes a slower, bluesy route and ensures Kartoon World ebbs and flows perfectly.

Kartoon World links its songs thematically and with an arcing storyline is an enticing concept album. Writing such a record can be a risky business; often a band can get bogged down in a complex story, and at the expense of songs. However, this album is obtuse enough that listeners can infer their own meaning (as all good art should) and Kartoon World can be (preferably) enjoyed whole or consumed piecemeal. ‘Time (Song for Dom)’ contains several suites and explores some prog roots while ‘La La Land’ could have come from the pen of Brian Wilson, but it doesn’t bear over-analysis, it’s just a great, great song. Attesting to the album’s kaleidoscopic nature ‘Magic Money Tree’ gets a bit funky while ‘Space’ is very Floydian in that whimsical, quintessentially English way. Bringing Kartoon World full circle ‘The Best Thing You Can Do Is To Love Someone’ is a song of hope, which is exactly where The Korgis came in…

Kartoon World is also available on vinyl (minus a few tracks) and this second disc presents the album in a glorious “Vinyl Mix” for a retro feel that presents songs such as ‘This Is A New Low’ in a whole new light. However, it’s the additional tracks that clinch the deal on this bonus disc. Kartoon World was recorded remotely and the demo version of ‘Magic Money Tree’ offers a glimpse of The Korgis writing process and, devoid of a slick production, becomes a whole new beast. Existing somewhere between Hawkwind and Jean-Michel Jarre a new mix of ‘Space’ becomes much more expansive and ‘Broken’ in turn is extra emotive. ‘Cartoon World’ closes this disc, and it would have made an equally fitting finale to the original album.

Almost 30 years since their last album (1992’s The World’s For Everyone) The Korgis latest release comes with a huge weight of expectation. Born from the global pandemic Kartoon World marks a triumphant return and, as the old adage states; good things come to those who wait.

* Not on Vinyl Edition 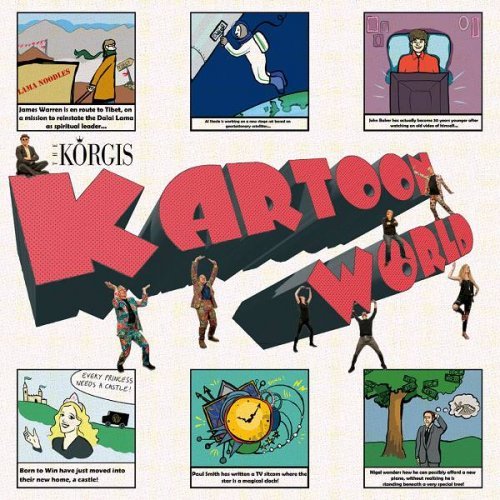