Following an incredible touring season in the summer of 2022, the DIY Gascon farmers The Inspector Cluzo, are thrilled to announce the release of their ninth studio album Horizon on 27th January 2023, via F.thebassplayer Records. To coincide with the record announcement, the band is also launching the first single and video for the title track, which is available here. 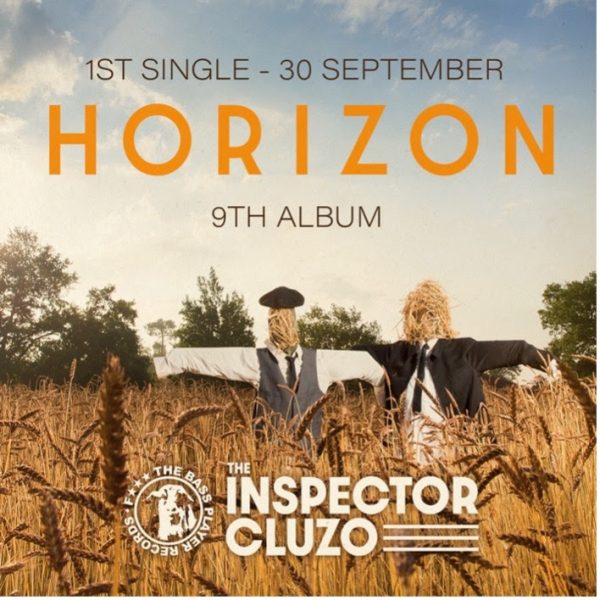 Each song shares and takes inspiration from real life events and experiences. For example: Wolfs At The Door, tells the story of the struggle the two farmers experienced when standing up against a duck factory located in front of their farm and the fight they had to put up when faced with a massive Bird flue pandemic. Saving The Geese describes the civil disobedience against the French State and the big local agro-industries corporations that wanted to kill the band’s healthy animals as “prevention”. Shenanigans re-evokes the great times the band spent in Nashville with their friend Bill Elder who run the Shenanigans bar and who put them up during all Nashville studio sessions. Rockophobia, on the other hand, is one of the surprises The Inspector Cluzo reserved for the fans, it is a funny rock number, in which the band wonders “what does rock mean today?” laughing at Iggy Pop, who later decided to feature on the track.

The first single and title track was originally written 15 years ago for the band’s debut album, but was never finished, until the pandemic hit. Horizon openheartedly brings to the front the band’s efforts in running their family-farm, whilst experimenting new agro-ecologic techniques apt to face climate change, saving rare species, free seeds etc… … .

In keeping with their reputation as one the most prolific touring bands in the world (they have played over 1200 shows in 67 countries to date), The Inspector Cluzo completed sold out USA support tours with Clutch and Eels in 2019, alongside a host of festival appearances across the globe (including Lollapalooza Chile and Brazil) and a maiden US headline tour. In the summer of 2022 The Inspector Cluzo played extensively on prestigious stages across Europe, including the widely renowned Hellfest Festival, where they gathered a crowd of 50,000 fans.