When this show was announced it stood out as a must see with such an outstanding line-up. The Graveltones last appeared in this building as support to Rival Sons (in the bigger room downstairs), almost a year ago. The Cadillac Three had only made their UK debut in December and this was the first chance for Birmingham to check out the trio from Nashville. 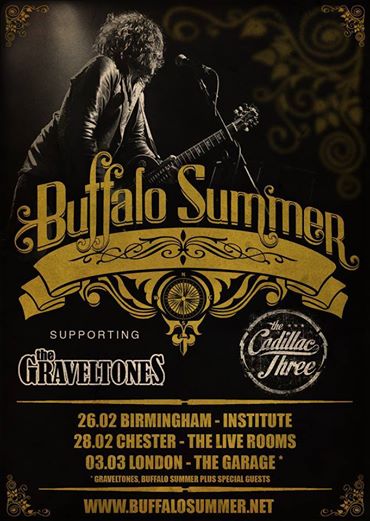 Opening the show were Welsh classic rockers Buffalo Summer. Touring in support of their acclaimed debut they start their set on a high with ‘A Horse Called Freedom’ and the quality doesn’t let up at all. Influences range from Free to Zeppelin to Skynyrd, while frontman Andrew Hunt has some of the cocksure swagger and style of Chris Robinson.  The catchy ‘Down To The River’ has the crowd singing along and the two new songs previewed have everyone looking forward to the second album.

From a band with a southern rock influence to one that are ‘all about the South’. The Cadillac Three are Jaren Johnston on lead vocals and guitar, Neil Mason on drums and Kelby Ray on bass steel guitar. Considering that Johnston has written for Keith Urban and Tim McGraw, it’s a surprisingly heavy sound that they produce, something the band themselves have described as ‘country fuzz’.

They open with ‘I’m Southern’ from the Tennessee Mojo album. Beers are delivered from audience to stage before the title track of the album is introduced as ‘a song about where we’re from’. ‘White Lightning’ is one of the highlights of the album and it sounds awesome tonight too, great vocals from Johnston. By this time the band have moved on from beer to Jack Daniels. The frontman shares with us the difficult experience of getting to this gig, but all is well that ends well.

‘The South’ takes us to Georgia, Alabama, Mississippi, Louisiana and Carolina while the refrain of ‘this is where I was born and this is where I’ll die’ again leaves us in no doubt about their southern pride. There’s still time for a solo from Mason before Johnston picks up sticks and joins him on the drums.

The Graveltones debut album Don’t Wait Down was released after a Pledge campaign, an increasingly popular way for bands to get their music released. ‘Bang Bang’ is the opening track on the album and it’s the perfect choice to open their set tonight. They had impressed here with their Rival Sons support slot but they take it up a notch with their own headline set.

For much of the show the crowd are captivated by the playing of drummer Mikey Sorbello, more than just a hard hitter, he shows moments of great subtlety too. Add the guitar and gritty vocal delivery of Jimmy O and it’s a killer combination. From the album, ‘Money’ and ‘Catch Me On The Fly impress. Jimmy O has mentioned Bob Dylan as an influence, but their cover of ‘You’re No Good’ is a million miles from the original, with it’s bluesy rock and roll, Graveltones style.

Sorbello solos, playing with four sticks, before ‘I Want Your Love’, their first single and ‘Six Billion’ bring to an end an awesome show from Mikey and Jimmy O, the dynamic duo from down under. A quality show from all three bands tonight, let’s hope they’re all back in the Midlands very soon.