As the opening act on the bill at this year’s Dames of Darkness festival, Glasgow band The Fall of Eve made as good an impression as a band could wish for under the circumstances. They had that almost indefinable something special, a confidence and rapport with the crowd that you’d more usually expect from a band much higher up the bill, which became even more surprising when it was discovered that this was the band’s first ever live gig, something even now, that I still find hard to believe. Almost everybody there instantly made a mental note that this was a band to watch out for.

They’d already recorded an EP in 2012, which gave several hints of the huge potential in the band, and now we have their debut full-length set. Pleasingly the band have chosen to give us 10 new songs rather than reprising or re-recording any of the songs from the EP, so we have 10 brand new cuts of home grown symphonic metal to devour. That confidence, one of the attributes which is so striking about this band, is very evident in the opening song, ‘Under My Skin’, and it’s worth noting straightaway that it’s obvious the band take a great deal of care over their arrangements, particularly the orchestral parts, even if they’re done on a synthesiser. That should be a given, but in this case they’re more than a backing track, not merely echoing the riff, but an integral part of the song. ‘Under My Skin’ is especially nicely arranged, with vocalist Evangeline setting the atmosphere by singing over a sparse string and drum backing. Good lyrics, as well.

After that there’s so much to enjoy on the album. ‘Forgotten’ is a sumptuous, piano led ballad, which will 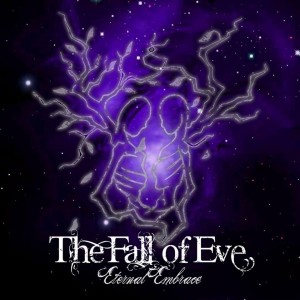 have audiences everywhere leaping to their feet and waving mobile phones around, and talking of arrangements, ‘The Devil Never Sleeps’ has one of the best on the album, an excellent song that had me making comparisons to ‘Once’-era Nightwish in my notes. ‘Left Behind’, the album closer is another cracker, with yet another fine string part, but for me the album highlight is ‘Strangers In The Dark’, where everything the band are trying to do comes together in a brilliant whole.

I do have a couple of reservations about the album, one minor, the other a little more serious. Firstly, this is a very short album compared to some, 10 songs weighing in at just over 36 minutes. Yes, quality over quantity, yes, ‘Reign In Blood’ was only 28 minutes and the debut Van Halen album only 32 minutes long, but I do think The Fall of Eve have missed a trick here. There are at least two or three songs on the album , ‘One Salvation’, ‘Amongst The Dawn’ and ‘Left Behind’ for example, where I thought the band might have developed them more, built on certain sections, with the possibility of taking the songs from the merely good into the possibly epic, and ‘epic’ is what this genre of music should be aspiring to, whereas the likes ‘Our Salvation’ and ‘Strangers In The Dark’ feel a little abrupt, even cut short.

Secondly, and more importantly, I was hoping to hear something that captured the essence of the band that was so impressive at Dames of Darkness, the attitude and immediacy to back up the quality of the songs, and on the first couple of listens, I couldn’t quite grasp it. But when I got further into the album, it had me, I heard that sweep and flourish that sets the band apart. It’s definitely an album that rewards repeated listening, and I hope people will be prepared to give it the extra time to get into what is a very good debut album. I’ve long been looking for a British band to be able to take on the Finnish and Dutch giants in this field. Winter In Eden are still the best we have at the moment, but The Fall of Eve definitely have the talent and potential to be right up there with them.