Arriving seemingly out of the blue, this is manna from heaven for any self-respecting Doors fan. A complete audio visual recording of the bands final filmed concert, their previously largely unseen set at the legendary Isle Of Wight festival in 1970.

The Doors, and Jim Morrison in particular, had the weight of the world on their shoulders on that August day 48 (gulp) years ago. The Lizard king still had the obscenity trial resulting from their infamous 1969 Miami gig hanging, Sword Of Damocles-like, over him as they took to the stage, Morrison facing a possible three year jail sentence.

Whether they were actively thinking about it or not, it seems to affect their performance, lending it a dark, oppressive air. As does the fact that they hit the stage at 2AM, not having been informed that they needed to bring their own lighting equipment. All they had was a single red spotlight which lends the performance a hellish feel, trapped in a purgatory of their own making, the dawn of some nightmarish apocalypse.

Despite these obstacles, the band plays brilliantly. Stripped of any onstage outrage, it rests wholly on the music, and what music it is. Morrison is in fine voice…and is also on his best behaviour – other than lighting a cigarette or shaking a maraca, he barely moves a muscle. His eyes shut, draped over his microphone stand – is he cowed? Running scared? Or serene and zen-like, lost in the music?

His stillness is hypnotic on ‘Break On Through’ as he implores the assembled masses to “get higher”. He disappears into the shadows for ‘When The Music’s Over’, Krieger peeling off a scorching, atonal solo before the song drops to a pulse, a heartbeat, Morrison milking every ounce of its theatricality and drama for 15 minutes.

‘Light My Fire’ is equally long. Morrison statue-still while the band fire on all cylinders, soloing wildly, passing the baton back and forth, stretching it out, out there, until Morrisons’ scream snaps us out of our reverie and back into the riff.

The near 20 minutes of ‘The End’ is a dark tour de force – a million miles from that heady ’67 summer of love. Plus, thanks to Coppola, we have that added layer of ‘Apocalypse Now’ imagery – Vietnam, death, Brando, bad craziness. And when Morrison shrieks “C’mon baby”, it’s a call to arms, it still has that shamanic (yes, I’m going there) pull. Snippets of poetry, of blues, of ‘Celebration Of The Lizard’ are thrown into the melting pot. The band push the tempo, the intensity, almost pulling the song apart completely, only to resurrect it from its ashes. And then it’s all over. Manzarek waves as Morrison wordlessly saunters offstage.

Hindsight and history are wonderful things. What might, at the time, have felt like a somewhat truncated, anti-climactic gig, now becomes a quite extraordinary document, full of portent and symbolism. Co-headliner Jimi Hendrix was also off-form, frail and lacklustre. The Isle Of Wight, along with Altamont and Kent State, became one of those pivotal events, signalling the death of the 60’s dream. There is startling footage of perimeter fencing being defaced and torn down, hippies brawling, tents pitched on the surrounding hills overlooking the 600,000 strong throng – looking, for all the world, like some decrepit refugee camp. And there were The Doors, playing in the dark. In their element. A glimpse of the celebration just before it all came down. 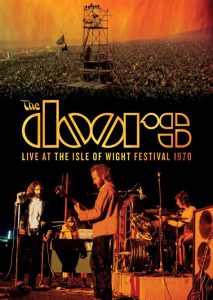