According to the opening track of this year’s Easter Is Cancelled, ‘Rock and Roll Deserves to Die’. But The Darkness are not doing a very good job of seeing it off. 9pm, the lights drop, cheers go up, and, all resplendent head to toe in white, Rufus Tiger Taylor plonks himself behind the kit, bassist and Richard Ayoade-lookalike Frankie Poullain enters stage right, and Dan Hawkins appears stage left, clutching an acoustic guitar to strum the opening chords of said song. From out of the darkness (geddit? Yeah, sorry…), Justin’s sombre sentencing of R’n’R’s emerges. We should be sad. But when Justin bursts on to the stage and the band kick in, it’s just fun fun fun from the evening’s dramatic beginning to its (sort of but not really) operatic end.

Riffs. Solos (no drum solos thankfully). Ear-shattering falsetto vocals. Catchy choruses. Hooks aplenty. Laughs aplenty. Swaying arms – for the slow bits. Clapping – ‘Radio GaGa’ style – for the ‘We Will Rock You’ bits. Dancing – lots! Singing – lots! And with a bunch of animated projections for us too, ‘tis a veritable orgy of rock ‘n’ roll excess and exaggeration. Never has a crowd been so forlorn at the sight of a deckchair sinking into the ocean. Or laughed so hard for that matter. Seeing Dan rap in a cap for ‘Heavy Metal Lover’ gets a few giggles too. There’s much in the way of rock posturing, drum riser leaps, clattering and crashing rock endings, wailing harmonies, and blazing, burning, soaring solos. Nope, rock isn’t about to die. The Darkness just aren’t trying hard enough. And they know it too. ‘We Are The Guitar Men’, with its refrain of ‘Long live Rock ‘n’ Roll’, says so. But nobody’s complaining. We’re all too busy having fun fun fun!

Set one is done. There’s a quick intermission. The intermission music and the word ‘Intermission’ emblazoned across the wall tells us so. With set two comes the classics. So too a leather jacket and Thin Lizzy t-shirt for Dan. And a blazing red jumpsuit for Justin. ‘One Way Ticket’ gets everyone back into it, not that we needed much encouragement. The showmanship of the band is off the charts as the show blurs the line between rock show, full-on Friday night party, and comedy show. And as if that red jumpsuit isn’t revealing enough, Justin rolls up the trousers to his knees and pulls out the arms and ties them around his waist. But it’s not for the wolf whistles, oh no. It’s for when he does a head stand and claps with his feet. ‘Love Is Only a Feeling’ goes down a storm. By now the crowd is a mass of rock celebration, fists pumping, arms flailing, booties moving, and singing every word back to the band. And despite ‘Get Your Hands Off My Woman’ and ‘I Believe In A Thing Called Love’ closing out the set in glorious style, we know they’ll be back. ‘Tis the season after all.

Yep, ‘Christmas Time (Don’t Let The Bells End)’ is the first encore, snowflakes and winsome words as the beautiful backdrop. While Christmas has been rammed down our throats since September – or was it March? It seems to get earlier every year – I think we’ll let The Darkness decide when the season of feigning joy and surprise at the gifts we despise begins, don’t you? And then, heaven forefend, Justin, Justin, our very own Justin, promises four more songs. But he’s toying with us. And we’d be a tad upset of it wasn’t so funny hearing him impersonate the BeeGees. ‘Love On The Rocks With No Ice’ featuring a guitar solo from Justin atop a roadie taking him through the crowd closes the show. We’re not sad. We’re happy. Very. They’ll be back. Won’t they? Rock ‘n’ roll deserves to live. And only The Darkness can make that happen… 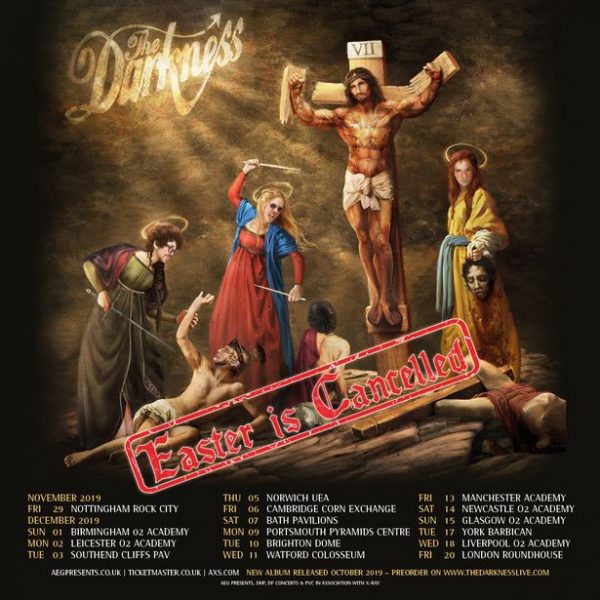