I’m a little bit late to the party with the review of The Darker My Horizon’s debut album Acquiesce but with the band still pushing their debut hard prior to the impending release of its follow up what better time to get it done! This is actually the new band of Sacred Heart’s Paul Stead (Vocals/Guitar) and Mark Stephenson (Guitar) so many people will already be familiar with TDMH’s primary song writers. Sacred Heart disbanded in 2011, but why return with a different moniker, I think this has a lot to do with stopping preconceptions and expectations on how the band sound. That said I personally find TMDH to be very close stylistically to Sacred Heart and although I remember Stead saying he wished to go in a darker and tad heavier direction I don’t think the band have strayed too far from the core elements of what made Sacred Heart such a great band. Of course a new name and clean slate allows the band to experiment with their sound and not feel restricted in their song writing and that is apparent throughout the album.

For me Acquiesce is probably the most accomplished album Stead & Stephenson have performed on and written in many ways, slicker production and improved song writing. Full of catchy songs and energizing rhythms. It’s like Sacred Heart coming of age so for me anyone who was a fan of them they will love TDMH. It is a new chapter for the guys and the quality of this album does prove as a positive statement of intent as the band forge ahead under a new moniker.

Stephenson’s guitar sound throughout the album has an Americanised modern rock feel ala Nickelback and Shinedown and this gives TDMH a heavier crunching guitar sound but I would still class them as melodic rock as they have far stronger melodic sensibilities than bands within that genre have, not just in Stead’s smooth vocals but also in the structures and harmonies of many of the tracks. They are like a blend of both melodic rock and modern rock but not sitting in either genre easily, perhaps heavy edged melodic rock is a more accurate description.

Whenever an album exceeds Twelve tracks I tend to find I think if they shorten the album it will have a more immediate impact making the album stronger minus the fluff. But at Fifteen tracks long Acquiesce doesn’t give me that same feeling, in fact I’d be hard pushed to decide which tracks should be cut such is the strength overall of the album. You’re definitely getting value for money here.

There is a good mix of songs and the blend of heavy edged rockers, commercial tracks and ballads is done just right to give the album lots of variation. This is also gives plenty of opportunity to showcase the various talents within the band.

There is a couple of re-recorded Sacred Heart tunes from their 2007 Shake album much heavier and slicker versions with better production which shows you just how far the band have come since then as musicians. There’s plenty to enjoy from the beautiful emotive ballads ‘In The Dark’ and ‘I Can’t Save You’ to the bombastic rock of ‘Closure’ and ‘There’s Gotta Be’ and the commercial hit in waiting ‘Can’t Stop The Rain’. 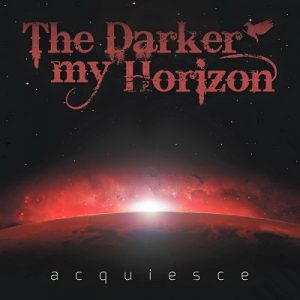