This is, by my reckoning, the Dan Reed Network’s first proper tour of the UK in about 22 years, and the first, other than sporadic dates, including Download in 2014, since they reconvened in late 2013. Apart from a slot at the inaugural Rockingham Festival in Rock City on the day after this gig, this was the closest to a Midlands date, and as a fan of the band since I witnessed them wipe the floor with Bon Jovi at the NEC on the New Jersey tour, seeing them play a full set after all these years was an absolute must.

Pleasingly, the tour was a three band bill, scoring well on the Value For Money meter, but if the headliners are to play a full set, this often means an early start, so it was that West Lothian’s The King Lot began the evening’s entertainment ten minutes earlier than the advertised start time of 7.30. I hope it doesn’t sound critical to describe them as a straightforward, no-frills melodic hard rock band, because that’s what they are, and with some good songs, too. Tonight, however, they were done no favours with the sound mix, with the drums so far up in the mix that for the first part of the set the vocals were almost drowned out and for almost all of the set, Michael Fairbairn’s guitar solos were too. There was a bit of an odd moment when bassist/vocalist Jason Sweeney pointed out that the band were supporting Love/Hate in the venue in a couple of weeks, so I don’t know if the subsequent cover of ‘Blackout In The Red Room’ is a regular feature of the set, although it was pretty well done, especially if it had been knocked together when they arrived on the day. A short but very listenable set.

The Electric Boys are currently touring to celebrate the 25th anniversary of their debut, and it has to be said, defining album, ‘Funk-o-Metal Carpet Ride’, which included possibly their best known song, ‘Lips and Hips’. If you are unfamiliar with the band, the presence of sometime Hanoi Rocks members Conny Bloom and Andy Christell in the line-up might lead you to expect a glam metal punk outfit, but the band have a lot more about them than that. For a time in the early 1990s Electric Boys looked like Europe’s answer to the Red Hot Chili Peppers with their own brand of funky blues rock on their debut making some real waves, but as with so much quality music around that time, the Year Zero of grunge swept them aside. There was some of the Hanoi about them tonight, but far better was the bluesy swagger of songs like ‘Electrified’ and ‘Where The River Flows’, and these songs worked far better in this setting than the other stuff. They obviously had a lot of fans in the Tivoli crowd, as Conny Bloom had no difficulty in getting the crowd involved in the singalong and call and response parts of ‘Electrified’ and ‘Rags to Riches’. They seemed to fare slightly better with the mix than did The King Lot, although the backing vocals did get a bit lost at times, but while there were some good moments in this set, there were also some flat ones, and in the end it wasn’t really that memorable. 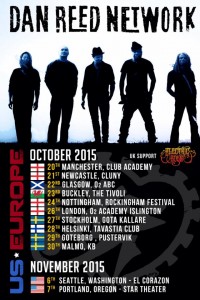 If the other bands on the bill hadn’t had the best of the sound, it seemed the Dan Reed Network weren’t going to suffer in the same way. Their first appearance on stage was to institute a thorough soundcheck, particularly for the on stage sound. As Dan himself remarked to the crowd, they wanted to get it right from the start, rather than mess with it during the set itself. At last they were ready and launched straight into ‘Resurrect’, a track from the debut album, a track that wasn’t performed live that often in the past. At first it seemed an odd choice, but listening to the lyrics, ‘It’s time to resurrect our love,’ made it seem very relevant. After that it was just a case of guitarist Brion James playing an opening lick of any particular song, the crowd cheering in recognition and one of the best live bands I have ever seen were well and truly back.

One major difference for this series of gigs was that keyboard player Blake Sakamoto was unable to make the trip for family reasons, so Rob Daiker, from Dan Reed’s solo band filled in and did an expert job. I can also never remember Dan Reed himself being this animated, whether with the original band or in his solo shows. He prowled the stage like a WWE wrestler stalks the ring, with regular visits to the barrier to be with the crowd, almost a completely different person to the more spiritual and relaxed singer you meet at his solo gigs, although the One Direction jokes were still present and correct.

And the songs! Almost a DRN fan’s fantasy set list. Only ‘Baby Now I’ was taken from the band’s final album The Heat, the rest were split almost evenly between Slam and the debut. After ‘Resurrect’, ‘Under My Skin’ started the party, and even in the gentler songs, the band kept up the momentum throughout the 100-minute long set. ‘Rainbow Child’ was absolutely joyous, I swear I saw the large gentleman next to me get something in his eye during the first verse, and ‘Stronger Than Steel’ never fails to have a crowd in full voice. There were so many other highlights, ‘Baby Now I’ stopping and starting because James had played a new introductory guitar lick that Dan Reed was quite taken with, Reed singing a snatch of Floyd’s ‘Money’ in the middle of ‘Come Back Baby’ without missing a beat, the guitar and bass duel between James and Melvin Brannon (voice and guitar) in ‘ Baby Don’t Fade’, and best of all, at the end of the main set, DR explaining that in his solo shows the one song he was always asked to do was impossible to play without his band, but now they were together.. and the crowd erupting at the opening riff of ‘Tiger in A Dress’.

Where this band is concerned there will always be a debate about why they didn’t break through the first time; they had the looks, the songs, the opportunities (not every band gets support slots from Bon Jovi and the Stones), but as drummer Dan Pred once said, so many little things at the time weren’t right. Maybe they won’t make it big this time round, and while they once played one of my ten all-time favourite gigs, perhaps it was a little bit much to hope that the magic could be recreated, after all, isn’t it said that you should never go back? But this was not only better than I dared hope, but even better than I could have hoped. Welcome back, guys, it was a blast to see you again. One of my Gigs of the Year.