The Cure – never a band to short-change their fans – now lavish upon us this sumptuous 2 disc DVD box set containing two full shows recorded last year in London. 2018 was a momentous year for Robert Smith & co. marking, as it did, 40 years since a nervous, youthful Cure first stepped onstage (at The Rocket, in Crawley) and so, to commemorate and celebrate, the band announced two very differing gigs to mark the momentous occasion.

Smith took advantage of his invitation to curate 2018’s South Bank Meltdown festival to plan a special Cure show. They would play a career-spanning concept show (more of this later) and, a week or so later, host a massive greatest hits party in Hyde Park. Both of these shows are here and what wonderfully diverse shows they are – light and dark, thought and emotion, celebration and reflection. And both of them are stunning, in very different ways.

The conceit for Curaetion – 25 is a brilliant one. The band play a song from each of their 13 studio albums in chronological order. Then, upon hitting the midpoint of the show, they play 2 new, unreleased songs before playing another song from each album, but this time in reverse chronological order. We are, in the bands words, taken “from there to here” and then “from here to there”. Back to the future…or forward to the past. Either way it’s a masterstroke.

The show itself is stunning. A high water mark even for a band as good as The Cure. The performances and song choices are brave and stunning. The show has a plan, a narrative. Songs unplayed for years get dusted off and aired. It is an atmospheric, thoughtful gig. The band, for the main part are shrouded in darkness and dry ice. Occasionally there is light and several songs are shot in black and white with flashes of arterial red. Simon Gallup’s bass is, as ever, a thing of joy while relative new boy Reeves Gabrels adds considerable muscle and flair (more about Gabrels later).

The gig builds in power and intensity. ‘Bananafishbones’ is full of wah-wah and harmonica while ‘Like Cockatoos’ makes use of the backscreens. Smith, meanwhile, is soaking this up – completely engaged and committed. The new tracks – hopefully a taste of things to come – are aching and powerful, Smith’s songwriting nous heading successfully into late middle-age. And then comes the reverse trip. Smith is relishing taking us on this journey, there are multiple emotional peaks, just when you think the show can’t get any better, it flippin’ does. An epic reading of ‘From The Edge Of The Deep Green Sea’ segues straight into a truly majestic ‘Disintegration’, creating a veritable Sistine Chapel of sound.

We’re then into a cleverly handpicked run of early classics – a fearsome ‘One Hundred Years’ from their none-more-dark ‘Pornography’ album leads into ‘Primary’ and ‘A Forest’ all played with furious power. Wow!

Oh yeah, Reeves Gabrels. What an inspired choice for joint lead guitarist. He’s found his perfect home. His multiple FX pedals get used to the max as he brings lashings of that technicolour guitar noise terrorism he lent to Bowie in Tin Machine and the criminally underrated ‘Outside’. The Cure have never sounded so muscular or rocked this hard.

And so to Anniversary. Directed by renowned music promo director Tim Pope, this immediately has a totally different look and feel. There is daylight! Sunshine even! At a Cure gig! It’s bizarre – the band wander onstage, blinking into the daylight like lost moles. Seeing a sun-kissed Smith is akin to spotting Dracula wandering around a rural French open air garlic market, looking suitably pasty and baffled,you expect him to disappear in a puff of smoke and flap away.

The mood too is different. It’s a party, a celebration. The band ease into the gig with a gorgeous ‘Plainsong’. ‘The Walk’ wakes the crowd up and from here on in, we’re off and running. Cure gigs are always marathons and these shows are no exception. Smith is the goth Springsteen and is determined that no hit will go unplayed. He and the band seem to genuinely be enjoying this, chatting to the crowd and trading smiles. Yes, smiles!

A huge roar of approval greets ‘Push’, Smith taking a moment, relishing hearing 65,000 voices singing his song back to him. ‘A Play For Today’ is a shared communion, Hyde Park singing the melody and swaying in unison. The slowly setting sun casting a warming amber glow over the assembled gothage.

As the sky darkens the enormous screens come to life. ‘A Forest’ is stunning, damn near definitive and then we get a genuine rarity…’Burn’ from the soundtrack to the 90’s Brandon Lee movie, ‘The Crow’. ‘Never Enough’ rocks harder than it ever has and the band finish with a raw, breathtaking ‘Disintegration’.

Next come the encores. Usually with The Cure there are at least two encores but, due to the notoriously ridiculous Westminster curfew laws (just ask Springsteen and McCartney), the band have to make do with one…albeit extended. It’s split into two parts – a joyous run through the pop hits (during which Smith almost dances!!) followed by a brilliant clutch of early classics (not played live since 2011) which see the band riffing back to their post-punk roots.

There aren’t enough superlatives for this. Beautifully packaged and filmed and flawlessly performed. Magnificent, powerful, ecstatic, thoughtful, dark, light, heavy, lilting, giving and stunningly emotional. Even if you’re only a casual Cure fan you need this is your life. It’s a definitive career-capping live collection from one of the truly great live bands. Fucking essential. Treat yourself to this, you’ll thank me later. Here’s to the next few decades. 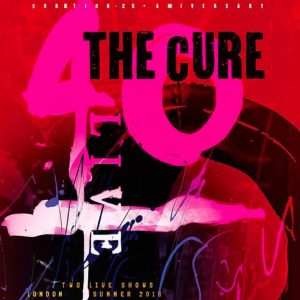