Country fuzz heroes The Cadillac Three have unveiled a psychedelic animated video for their track ‘Devil’s Lettuce’, taken from their 2020 album Tabasco & Sweet Tea. The video was premiered at 4:20pm yesterday in the US, in line with one of the many puff-puff-pass traditions the song celebrates.

The track was written by band-members Jaren Johnston and Neil Mason. Speaking on the new video, Neil comments, “After seeing Nashville based animator, Shane Pielock’s work in a video by local indie artist, Tomorro Tomorro, we loved how he was able to create something visually compelling and narratively complete with simple line drawings. Even if it’s just a drawing of a question mark by itself in the middle of the screen, there’s something cool about it.

Jaren continues, “’The Devil’s Lettuce’ video is a fun homage to one of our favourite pastimes. Got some fun cameos in there too from our good friends Brothers Osborne and Brent Cobb. It’s psychedelic and crazy and perfect for the song!”

The Cadillac Three are also celebrating ten years of being a band and are currently on tour in the US. Kelby Ray comments, “We have some pretty badass fans who show up ready to party and know all of these songs from the beginning! It’s pretty cool to be back out there jamming together night after night.”

They will be culminating the anniversary celebrations with a very special tour of the UK and Ireland in December. Coming along for the ride is very special guest Brent Cobb who will be providing support at all dates across the tour. Find tickets here.

Speaking about the tour, the band exclaimed, “We can’t wait to come back to the UK and Ireland for our 10-Year Anniversary Tour! It’s been way too long and we’ve been counting the days ready to come back. Our good buddy Brent Cobb is opening and we couldn’t be more excited. Cheers, beers, and hallelujah, get your tickets, they’re going fast! Hope to see you there! Much love from TC3!”

Brent Cobb adds, “I can’t believe it’s been so long since I’ve been over to pick a song or few. It’s exciting that my first time back will be with my ol’ buddies The Cadillac Three. We’re gonna have a good time!”
10 YEAR ANNIVERSARY TOUR DATES
DECEMBER 2021 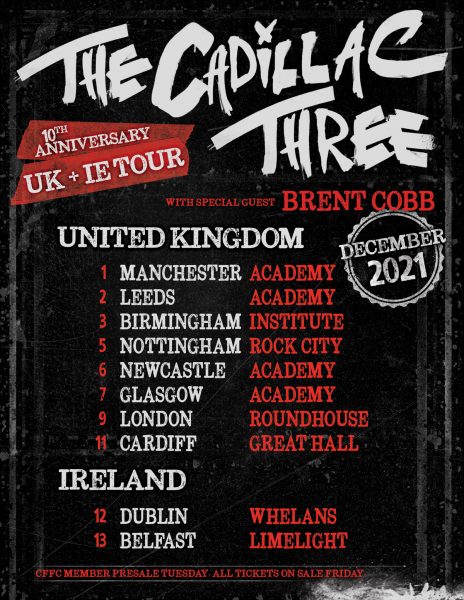