Imagine some seminal sixties’ rock band had been born in Sweden in 1970 and so in their formative years had sucked in the last dying, spluttering gasps of punk, one ear listening to the Clash and The Replacements, and the other ear tuned into the rise of bandana rock on FM radio. They would have been this band. And they would have made this album.

But today, Sliver And Gold will divide fans. On one side of the equation, the in-your-face punk attitood has been sanded away and polished up to a much more comercially inclined mindset. On the other side we find those always welcome constants – great songwriting, great melodies, intensity, passion and a fabulously 3D production job from Chips (Sator) Kiesbye. The solo /experimental years are behind them, and now they’ve cast their net to catch a wider audience – this is garage rock for the masses, and it’s great.

Full of chunky rock charm, ‘Simple Being Sold’ and ‘Shovin Rocks’ are the launchpads to full on, hard edged, take-no-prisoners pop melodies, powered by springloaded guitars, set against retro choruses. They are manna from heaven to anyone who thought ‘Minus Celsius’ was the perfect BB song. And a perfect intro to the aggressively infectious Bo Diddley rhythms of ‘Ragged Flag’, a call and response confessional dressed up in vaguely exotic monophobic textures, proving that anguished lyrics can add poignancy to the punkest, toughest tunes.

You can hear those memorably melodic moments reflected onto the boundless, big screen energy of ‘Yes To All No’ and ‘Bad Seeds’, reversing Nicke Borg’s scorched voice and world weary persona into Dregen’s laceratingly beautiful axework on ’44 Undead’ and catching on the fabulous chord progressions and sinuous hooks of ‘Sliver And Gold’. Like much of the rest of this record, these tracks are bolder and broader than what went before, and are perhaps the nearest the BBs have ever come to sounding like Motley Crue and/or Tom Petty.

Arguably then, in the midst of their second wind, the Backyard Babies are now carving out a unique place in popular rock culture. 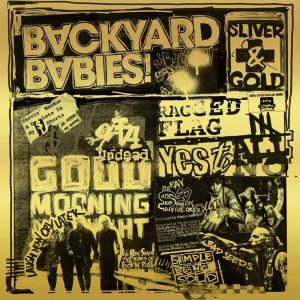