In case you’d missed it, electronic pioneers Tangerine Dream,despite having never really been away, have been back in a big way for the past few years, releasing a brace of CD’s which hark back to their illustrious past. Their 80’s soundtracks are especially back in vogue and, in 2016, things came full circle when they covered the ‘Stranger Things’ theme tune, which, itself, was clearly influenced by TD. Still with me, or are we trapped in a ‘Back To The Future’ time travel loop?

Now, with the release of ‘The Sessions 1’, Tangerine Dream turn their attention to their 70’s, prog-tastic oeuvre, in particular their live work. As was the trend in the 70’s, concerts were long affairs…loooong. Songs that you thought you knew note for note were often drastically re-worked on stage, to the point that they were virtually unrecognisable. And 3 minute gems often ran to 30 minutes, complete with drum solos, toilet breaks and back stage, ahem, mouth hugs. Improvisation was hip, man, if you didn’t jam you were, well, a pop band! And so it was with Tangerine Dream, their concerts became increasingly free form, set lists were thrown out of the tour bus and marathon improvs ruled. So, modern day Tangerine Dream are paying homage to this, albeit in a slightly more regimented, millennial way. Every show now includes a 30 minute (at least) section of improvisation, new and totally off-the-cuff, every night, and ‘Sessions 1′ is the first fruit of their electronic labours.

So, a proper old style album, one 30 minute song per side. Far out. Side one was recorded in Budapest and is an autumnal ambient piece. There is a warm lushness, it’s enveloping, flowing along languidly atop muffled electronic clatter and bleeps. A muted choir joins and sings to the heavens. It reaches a crescendo and just kind of stays there while a piano briefly and powerfully crashes in. The tune shifts subtly while trippy effects pan across the speakers, it becomes more insistent, almost dancey.

It drops to a pulse, a beat – the ambient wash gradually lapping at you from the background. Again it slowly recedes, fading into the distance leaving us with just a busy little blip and a moving and extraordinary final shrill wash of sound. The applause at the end jolts you out of your state of mindfulness.

Side two, recorded in Hong Kong, is still mostly ambient, but with more of an edge – faster, more robust and challenging. Sampled, wordless airbrushed vocals float around you while otherworldly noises, bleeps and whoops, unsettle you slightly. There are strange, flute-like whistling noises and a horror movie minimalist riff. The crescendos this time are harsher, noisier, coming and going with more regularity. It’s still beautiful but somehow sharper, more abrasive. It builds to a spiralling peak, a sheet of white noise and jarring effects as it collapses in on itself. But the ambience is still there, gently fighting to be heard. Y’know, it kinda rocks.

If Tangerine Dream are new to you, don’t worry. Ignore the hundred or so previous albums and jump right in, it’s a live album probably unlike anything you’ve ever heard. Fans of electronic music won’t need any encouragement, it’s a classic band on world beating form, playing brilliantly and creating a surprisingly analogue sound – big retro synths and sounds but with a modern twist. Founder member Edgar Froese, to whom this album is dedicated, would have loved it. Special mention also has got to go to the clear vinyl edition, ’tis a thing of beauty. 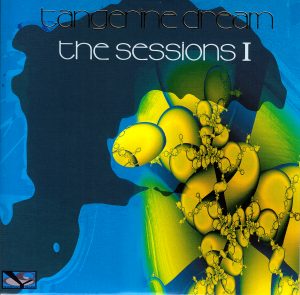