Review and photos by Angelina Pelova

When a Facebook notification popped up letting me know that Symphony X’s bass player Mike LePond invited me to their concert in Coventry, my heart stopped. I do try to follow the band’s moves and news, still somehow missed the fact they were touring… in the UK! After I poked around for information, it turned out I was not the only one dazed and confused. The logical question everyone asked themselves was, “Have they released a new album?” It is about time, as their fantastic CD “Underworld” was issued four years ago. A desperate Google search confirmed what I knew already: no, there is no new release as yet. So it must be a “surprise”, impromptu tour, which is one of the nicest surprises a band can deliver to their fans.

The gig in Coventry was part of the final leg of Symphony X’s European tour, following their participation in Fortarock festival, Holland. In contrast, the venues chosen for the UK concerts (on this occasion, Empire Coventry) are small and cozy, perfect for that united, like-minded atmosphere that brings audience and band close together. Only three gigs were planned in this country, which is why many fans travelled a distance to see the band and it was obvious that everyone was here for a reason, instead of just casual gig goers. The audience knew every word sung by Russell Allen, which made it a fantastic crowd, as the band members acknowledged themselves in our short chat after the gig. 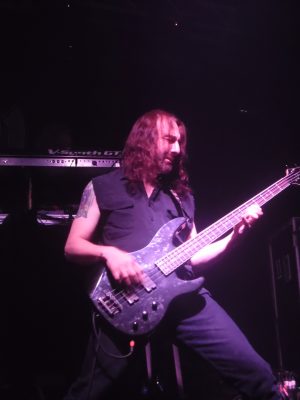 The choice of opening track was a great way to kick-start the concert with “Iconoclast”, title track of one of Symphony X’s heaviest albums (2011). Why gradually make an entrance, if it can be explosive and passionate from the word go? The tracklist compiled some of the highlights of their career, with blasting classics like “Serpent’s Kiss” (2007), “Domination” (2007) and “Sea of Lies” (1997). The latest release, “Nevermore” (2015), was featured, too, with three tracks: “Nevermore”, “Without You” and “Run With The Devil”. In the 2016 tour, this album was performed in its entirety, and those songs sounded just as fantastic now as they did three years ago.

Symphony X demonstrated once again that they are impeccable on stage. Each one of the band’s members is a pure virtuoso in what they do. They played in perfect syncronisation with each other and managed to make the gig work despite the far from perfect sound system. As a die hard fan who recognises their songs from the first couple of notes, I struggled to identify what I was listening to until a track was well underway. Yet, this did not manage to spoil the experience, as the band are that great together. Vocalist and frontman Russell Allen (known amongst fans as Sir Allen) was in top form, interacting with the crowd and cracking jokes here and there. Leading up to “Without You”, he briefly opened up about the trauma caused by his accident with Adrenaline Mob two years ago. He expressed heartfelt gratitude to everyone, even mentioning the spiritual world and energy around us – untypical direction for a metal gig to take, showing his maturity as a person and human being. 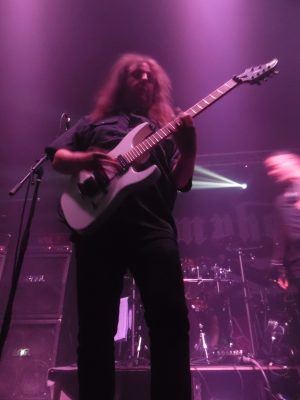 The crowd was responsive and dedicated, which made the concert a unique and warming experience. It exploded with the bombastic classic “Domination” and just when you thought it could not escalate beyond that, it actually did with the encore. “The Odyssey” (2002) is the last track a regular band would choose to play on stage. For a start, it is very long (over 20 minutes). This is a multi-dimensional, challenging play, where all the levels and harmonies would be a job enough to record in a studio environment, let alone perform live… yet they did it to the dot, as if coming out of their signature album. Everyone seemed to appreciate that this was the perfect way to end a brilliant gig. 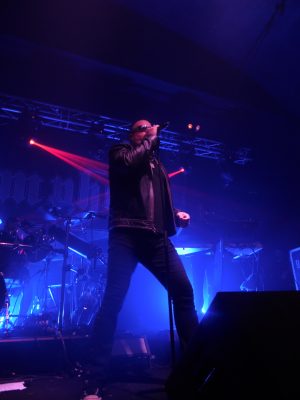 Thanks to my friendship with bassist Mike LePond, as well as the privilege of holding a journalist pass, I was lucky to meet the band members in person. To say I was starstruck would be an understatement. We all have moments in our lives that we will always hold special memories of; this is one of those moments. As most geniuses, the guys from Symphony X do not see themselves as celebrities and certainly do not act like ones either. I do hope to see them again soon, and if any of you who have not heard of this band yet, please give them a try. They fail to disappoint.