2014 marks half a century in the business for Suzi Quatro, the self-proclaimed girl from Detroit City and original pint-sized leather cat suit wearing biker girl of rock and roll. Joan Jett, Chrissie Hynde and more took their inspiration from Suzi’s stage persona and in the 70’s she was a permanent fixture on the singles charts both in the UK and elsewhere, most notably Australia where she still retains a loyal fanbase. Over the years she diversified into acting (Happy Days and a typically swaggering appearance in Midsomer Murders are two roles that come to mind) and penned her autobiography, Unzipped, which must rate as one of the most candid warts and all accounts of living the rock and roll lifestyle and which she subsequently presented as a one woman show. 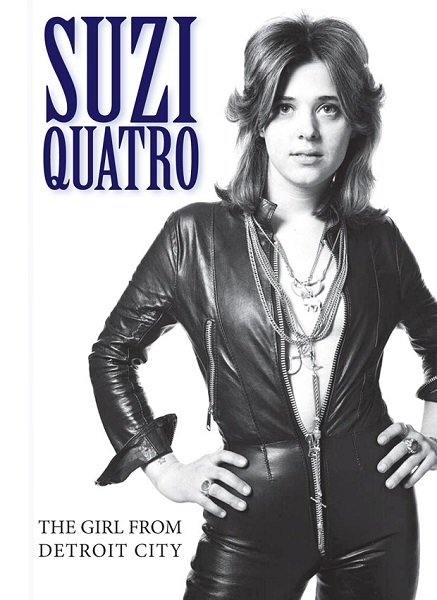 This expansive box set stretches across four discs and encapsulates Suzi’s career from the chart topping heyday of the golden era of glam rock – ‘Can the Can’, ’48 Crash’, ‘Devil Gate Drive’ etc – and comes right up to date with the newly recorded title track. Along with all the hits there are classic album tracks, B-sides and rare European only singles plus 20 previously unreleased tracks on Disc 4 including a collaboration with Jeff Beck on a version of The Eagles ‘Desperado’. As is customary with these types of retrospective sets it is all lavishly presented with extensive liner notes and vintage images and other memorabilia in a 56 page hardback book. The songwriting duo of Chinn and Chapman may have provided Suzi with her most commercially successful period but in recent years she has given her own twist on cover versions of Goldfrapp (‘Strict Machine’) and Rhianna (‘Breaking Dishes’) which are duly delivered in her own no nonsense style. More traditional covers include Abba’s ‘Does Your Mother Know’ with the Sweet’s Andy Scott and Dave Clarke Five’s ‘Glad All Over’.

No doubt conscious that after fifty years she is approaching the end of life on the road Suzi has announced what will be her final tour of Australia during the early part of 2015 and no doubt some UK shows will be confirmed in due course. But can she continue long enough to make her Diamond anniversary? Well she is famous for saying that “I will retire when I go onstage, shake my ass and there is silence” so don’t bet against her reaching that milestone in a decade’s time. The Girl from Detroit City boxed set is released via Cherry Red Records on 20 October 2014.