‘Road Chronicles: Live!’, the first live album from blues band Supersonic Blues Machine, is a definite album of two halves – both of them good, but…different. The band was founded by rhythm section Fabrizio Grossi and Kenny Aronoff and featured a revolving door of guest singers and guitarists, chief among them being Lance Lopez. Following Lopez’s departure, Brit blues up-and-comer Kris Barras was drafted in and thrown into a baptism by fire…the live album.

We slide (literally in Barras’ case – his trademark slide guitar is all over this) into ‘I Am Done Missing You’ – a chilled, soulful affair, full of gently wailing harmonica and smooth backing vocals. And this approach pretty much sets the template for the next brace of songs. It’s an almost yacht rock interpretation of Blues Machine’s back catalogue, smooth, but with slightly rough edges.

‘Remedy’ (no, not the Black Crowes) is sun kissed and Allman-like, twin guitar harmonies kicking in very nicely. And on it goes on its MOR way – gospel backing vocals, relaxed vibes, mellow keys and confident gear changes with Barras’ vocals adding a Bon Jovi-esque topping.

‘Bad Boys’ (no, not Whitesnake) and ‘Let It Be’ (no, not The Beatles) add a steady procession of retro style solo’s – be it drums or bass. It’s all utterly proficient if a tad superfluous. There is a clear shift from the gritty attack of Lopez, it’s all gone a bit ‘Miami Vice’ – but hey, it’s cool, it works, it convinces.

So, that second half I mentioned. The cooler than cool drawl of Billy Gibbons signals something of a change of tone. It’s party time. The band launch into a triumphant tear up of ‘La Grange’ (no, not…oh actually, yes it is!). Energy levels spike, carried along on a riff that never gets old and Gibbons’ unmistakeable greasy tone.

‘Running Whiskey’ is a short, sharp dose of outlaw rock, deftly administered by Dr. Gibbons and then we move on to your actual bona fide blues – we groove, stomp and slither through Elmore James, weld a touch of blues harp and Bo Diddley beat to Muddy Waters and end with one of the great riffs for a heavy jam – ‘Going Down’. The good Reverend heads off into one of those scuzzy, lazy river solos that splutters and belches and leers. Add in a voice box and more harmonica and it’s a veritable masterclass.

So, yes, two very distinct albums in one. The AOR first disc and the down low Chicago stomp of the second. Both albums are equally good in their own way, Billy Gibbons adds a touch of sheer class while Kris Barras makes a fine replacement for Lopez. Recommended. 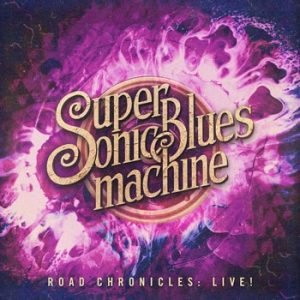