Life Metal would be a great name for your average denim and leathers heavy rock crew. It’s not necessarily the kind of album title you would readily pin on one of the industry’s most obscure and impenetrable acts. Sunn O))) are something of a square peg in a round hole. Nothing about their terminable sonic drones should find a resting place within what most would accept as conventional metal song structures.

Of course that in some way reflects the appeal of this most abstract of acts, American born and bred, although with not a hint of Trump-tub-thumping Stars and Stripes élan. Sunn O))) operate in an instrumental hinterland through which no life form seems sustainable.

Shifting unnervingly from one extended drone sequence to the next with just the tiniest of inclines here and there to allow for some shape and symmetry, Sunn O))) paint what for many would be little short of a sonic nightmare. Vocals are generally almost entirely absent but equally so are the more dynamic riff surges of doom instrumental acts such as Bell Witch and Clouds Taste Satanic.

Life Metal, released this week via the excellent Southern Lords Records, is Sunn O)))’s first new studio album in four years and is just as uncompromising and hypnotic as all that have gone before. Like a good book it’s simply impossible to pull yourself away from it once its mesmerising sway takes hold.

The opening composition ‘Between Sleipnir’s Breaths’ moves at funereal pace, is heavy of heart although in many ways bucks the band’s own convention with disparate wisps of spoken female vocals adding an additional layer of laced decay, while the animated shards of light are expressed with just a hint more abandon than we’ve come to expect.

As with the second piece, ‘Sonic Air,’ the running time breezes through the 10-minute mark although the two tracks that follow are considerably lengthier still. The difference in mood and ambiance between the first two pieces is slim, so they seem to bleed from one to the next with little to distinguish the two.

Co-founders Stephen O’Malley and Greg Anderson returned to the same LA studio where life was first given to Sunn O))) a little over 20 years ago to record Life Metal before skipping over to Chicago for a fortnight where the musical maestro Steve Albini applied a discreet layer of polish. The analogue production is entirely in keeping with Sunn O)))’s penchant for the base level, rather than more animated edges.

Life Metal’s third track ‘Aurora’ is a near 20-minute lesson in aural annihilation although not of the Napalm Death variety. Sunn O))) simply strip away the outer layers to pursue their single-minded desire to create bewitching deathly symphonies that turn the air grey. ‘Aurora’ sucks the life out of everything, as a combative drone slowly drags over you as though extinguishing all forms of life.

Occasionally when confronted with such heavy lines of extended sonic strips those unfamiliar with the genre are prone to ask, “when does it get going?” Well of course in the hands of Sunn O))) it never does.

The first three compositions alone have quite a debilitating effect and that’s before we get to the epic 25-minute transcendental closer ‘Novae’ which drags you under its spell with the assured ease of a master magician, gradually allowing more abrasive edges to assert the deeper into the ungodly maelstrom we venture.

It’s worth adding that classically trained Icelandic cellist Hildur Guðnadóttir – who notably shared the Barbican stage with Sunn O))) a couple of years ago – also guests on Life Metal, an album that few will match this year in terms of depth and gravitas. Sunn O))) will no doubt go close later in the year themselves however when they plan to release another more meditative album called Pyroclasts.

With their symbolic monastic hoods and robes Sunn O))) make for an utterly absorbing proposition on a smoke filled live stage, something UK fans – including those residing in the Midlands – will get to sample in a few months’ time. 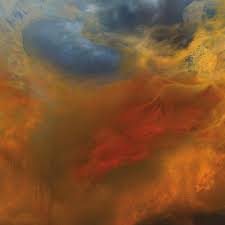