So, after three years and their fair share of lows, Suicide Silence are back. After the death of frontman Mitch Lucker in 2012, there were lots of uncertainties facing the band. After nearly a year of inactivity following the Mitch Lucker memorial show (click here to read our review of the DVD), the band announced former All Shall Perish vocalist Eddie Hermida as their new vocalist. You Can’t Stop Me is the first album featuring the new incarnation of the band, and it’s not bad.

The overall sound on You Can’t Stop Me is textbook Suicide Silence, the guitar tones, the drumming, and the subtle electronic nuances are all very similar to those on Black Crown. The album is low and heavy with various tempo shifts. Tracks such as ‘Warrior and Monster Within’switch up between chugging grooves and blast beat barrages. Vocally, Eddie Hermida fits into place perfectly. Utilising more of his highs screams than lows, Eddie adds a rawness to the tracks, the screams feel dry and harsh, and this contrast with the deep low guitar tone works really well.

The first single from the album, ‘Cease to Exist’, isn’t perhaps the best track that Suicide Silence have written but it is damn catchy. Title track ‘You Can’t Stop Me’also features lyrics written by Mitch Lucker before his death, adding a nice sentimentality to the record. In an interview earlier this year it was stated that the band feel this may not be their best work but it’s the album they are most proud of, and with the rollercoaster ride the band have been on since the passing of Mitch Lucker this is perfectly understandable. You can feel it’s not as strong as Black Crown or The Cleansing, but it is by no means a crap album. Stand out tracks include ‘Inherit the Crown’and ‘Ending Is The Beginning’, both are punchy and heavy but with significant hooks. What You Can’t Stop Melacks is that massive anthem, that ‘Only Live Once’, ‘Wake Up’ or ‘Fuck Everything’ barnstorming monster of a track.

But You Can’t Stop Meis still a strong album. There will naturally be a slight breaking-in process for the new line up, it may take an album or two for the band to really build up steam again and get back on the creative level of Black Crown. But for now this album is a good as anything we could have hoped for and I think the best is definitely yet to come with this new line up. Although there will always be a slight contention between the Mitch-era Suicide Silence and the new incarnation of the band, I think fans will still love the Eddie Hermida era. 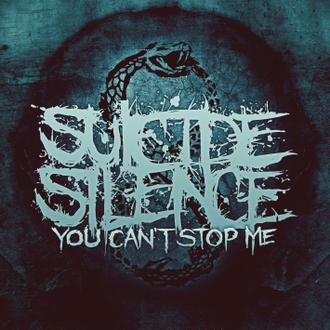