On November 1st 2012, heavy metal lost one of its most promising rising stars. Mitch Lucker was one of the most charismatic frontmen in alternative music. While the metal community mourned the loss and gave their condolences to Mitch’s young family, they also began to rally together to pay tribute to their fallen brother. On December 21st 2012, past and present members of Suicide Silence gathered with some of heavy metals most familiar faces. It was announced that all royalties from the show would go to the Kenadee Lucker Education fund. This fund was set up to ensure the financial support for Mitch’s daughter to complete her education.

The show features a who’s who of metal vocalists. Vocalists from Lamb of God, Asking Alexandria, Machine Head, All Shall Perish, Hellyeah, Soulfly, Job for a Cowboy, Winds of Plague, The Devastated, Impending Doom, Suffokate, As I Lay Dying, Bury Your Dead, Big Chocolate, After the Burial, Too Pure to Die & Of Mice and Men. The show includes a number of covers from the likes of Sepultura (with Max Cavalera) and Deftones. Probably the most poignant cover is Robb Flynn and Suicide Silence guitarists Chris Garza and Mark Heylmun playing Black Sabbaths ‘Die Young’. The crowd goes silent as Robb begins to sing, the words resonating deep through everyone listening. It wouldn’t surprise me if there wasn’t a dry eye in the house. Occasional shouts of approval from the crowd signal just how hard hitting that cover truly is.

Aside from the sombre emotions running through fans and artists alike, there is a hugely positive vibe. Every song is played with brilliant efficiency and energy. It would appear everyone is rocking the fuck out as hard as they can in honour of Mitch Lucker’s Life. Top credits go to Whitechapel’s Phil Bozeman, Winds of Plagues Johnny Plague and probably the biggest props go to Lamb of God’s Randy Blythe for his mindblowing version of ‘You Only Live Once’.  One of the biggest highlights has to be the Deftones cover, performed by the band with Mitch’s vocals played over the top. It seems slightly surreal hearing Mitch’s voice played on this occasion but it works brilliantly. The crowd go crazy for the whole four and a half minutes and respond to all of Mitch’s prompts and requests for the crowd to bounce.

If you take the ‘The Ending Is The Beginning’ solely as a live album, it’s probably up there as one of the best ever recorded. When you combine that with its purpose it becomes one of the most poignant and superb live shows ever. I couldn’t think of a better way to pay homage to an icon of modern heavy metal.

Although all proceeds of this DVD/CD will go to the Kenadee Lucker Education Fund, if fans wish to donate more there is a donation page at www.suicidesilence.net/donate 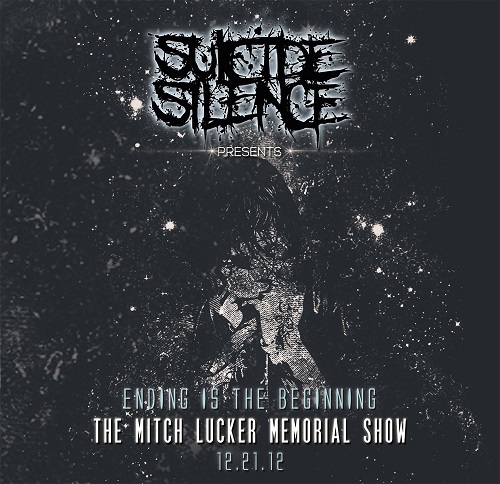