After Frank Mullen, the original vocalist for Suffocation, announced that his touring days with the band were probably at an end, many were left contemplating the future of one of America’s longest-serving death metal acts. However, the show goes on and so at The Underworld in Camden, it was Ricky Myers of Disgorge picking up the mic. Although the founding and enduring drummer of the San Diego outfit, Myers has been the on-off live vocalist for Suffocation since 2014. Walking onto the small stage, he had more than a little ‘Dothraki’ about him, staggeringly tall and able to command the basement club with his natural ferocity; Was this Khal Drogo raging war, or an enigmatic metal vocalist? Whichever, the stage struggled to contain both his physicality and vivacity.

This was a one-off London show for Suffocation, currently conquering Europe on The Realm of Darkness Tour so Midlands Rocks thought it was worth the trip. And so did a lot of other people. There was a real feeling at The Underworld of a coming together, united in a celebration of death metal and all it stands for. This was evidenced by the sizable crowd, on a Monday night as well, which grew slowly but surely as the supporting acts took to the stage.

Total Consumption were an odd choice to open the evening. A band seemingly eager to place themselves somewhere between Napalm Death and Municipal Waste; the fun and jovialities were not matched by technical skill. Sure, you can have a song called ‘Nutella’, but do you have the riffs to stand it up? Not quite. Up next were Casket Feeder – recently seen at The Hammer And The Anvil in Birmingham on the Teethgrinder-topped bill. A promising sounding set featured material from recently released EP, Scalps. Hair-raising stuff! They were followed by Black Skies Burn, an impressively brutal (for a vocalist in a cowboy hat!) death grind band from Oxfordshire. They were good fun, with a set that included ‘3 covers in 10 seconds’ and an Extreme Noise Terror cover. 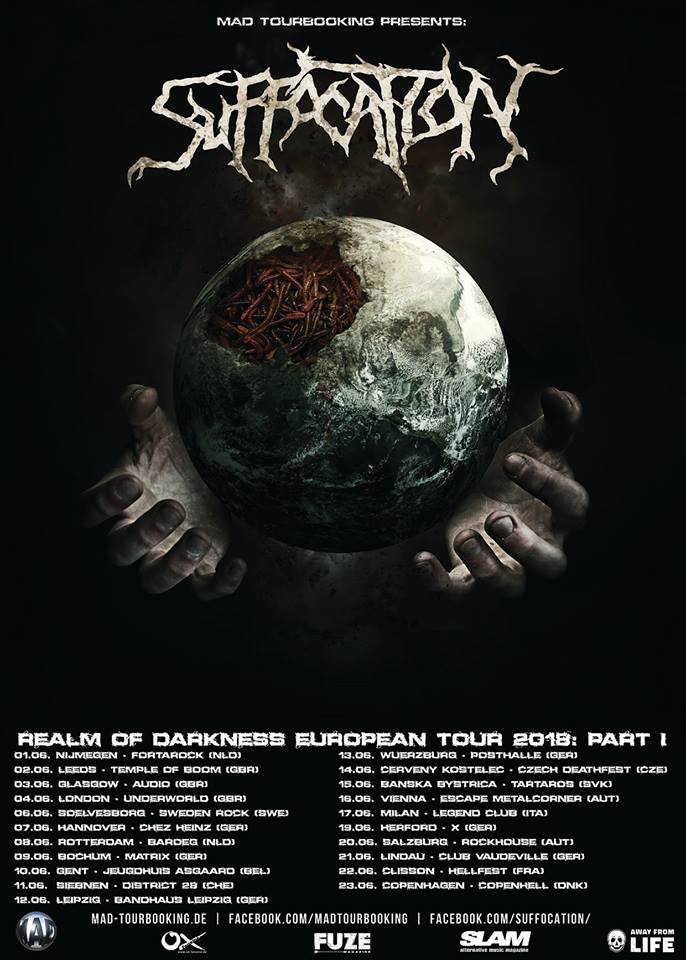 And then the main meal was served. Still going strong after 28 years, Suffocation have more than earned the accolade of death metal veterans. Although Mullen, as mentioned earlier was absent, lead guitarist Terrance Hobbs was out in all his brutal glory. Hobbs is one of the key elements that has given Suffocation the edge over so many of their death metal comrades across nearly three decades. His skill and finger-whizzing dexterity add the technicality and intelligence to which Suffocation have long been revered.

But this event was a celebration from the opening blast of ‘Thrones In Blood’ and the crowd were all intent on a good time. This resulted in an almost constant wave of crowdsurfers. The stage at The Underworld is knee-height, meaning a small hop is all that is needed for metalheads to grace the stage and jump into the tightly packed throng in the pit.

Perhaps this is why Hobbs seemed to stand out more than Myers, who was often fighting for centre stage against a sea of air-bound thrill-seekers. Even so, Myers seemed to join them in a display of typical metal friendship, rather than struggling for the limelight.

Myers discussed the band’s latest album ‘…Of the Dark Light’, although now a year old, whilst also taking the crowd back to old favourites such as ‘Pierced From Within’ and ‘Liege of Inveracity’. Although without Mullen, Suffocation were on top form as always, encoring with ‘Entrails Of You’ and reinforcing to the room of hungry metal devotees that their position as one of death metal’s most successful pioneers is firmly cemented. And with a crowd which seemed devoted to doing the Frank Mullen ‘chop’, it was like he was in the room anyway….