Back with a neck snapper…

For a considerable amount of time, the prospect of Lamb of God releasing new music was as likely as Justin Bieber dropping his first thrash album and then playing it to his worshiping fan base of 12 year old girls. While the death of a fan in the Czech Republic lead to a storm of measures causing many to question whether vocalist, Randy Blythe, would ever be exposed to more than the four walls of his prison cell let alone being reunited with his band mates, it would appear that their emotional turmoil has only strengthened the band. Sturm Und Drang, the latest addition to the Virginian born and bred brothers’ discography, delivers everything that fans around the world have craved since 2012’s Resolution.

Without a doubt it is the combination of aggression and sincerity which allows this album to tick all the boxes of a best-selling metal album. Taking into consideration the fact that Lamb of God are such a universally appreciated band, it would be safe to state that whatever the five guys planned to release would cause conflict. Straying from their roots would urge early fans to throw a bitch-fit at the lack of breakdowns, stripping the average elitist metal-head of their title of being ‘brutal’, whereas churning out the same album for a seventh time would quite evidently be pointless. ‘512’, ‘Engage the Fear Machine’ and ‘Still Echoes’ are examples of the band aiming to please both parties while they act as a safety net against more raw numbers which uncover a new side of Lamb of God.

‘Overlord’, arguably the most musically controversial song which the band have let loose, at first is incredibly uncomfortable although Mark Morton’s effortless blues licks compensate for the absence of the traditional Lamb of God album instrumental, making every guitarist drool before wanting to chop off their fingers in frustration. The concept of Randy Blythe singing rather than puking his guts out on a record sounds more exciting than what is conveyed during this piece however, I cannot fault the band for wanting to approach things differently for their seventh album. Midway through the song, the old Lamb of God return and it is only then that you are able to appreciate the effectiveness of the contrast.

It would be extremely easy to overlook the blood, sweat and dare I say tears that have been put into producing Sturm Und Drang; while although it fails to metaphorically give you a black eye upon its first listen, I cannot help but feel that this is due to the fact that the question ‘Are Lamb of God getting soft as they age?’ has been thrown around so much with the release of lighter tracks. This is not at all true. While, ‘Torches’ and ‘Delusion Pandemic’ offer the dirtiest of riffs accompanied by unmistakable Chris Adler beats, this album like every other the band have released is sure to snap some necks. There is absolutely no chance of these blokes turning up in suits singing love songs to a four chord progression. Lamb of God are back. 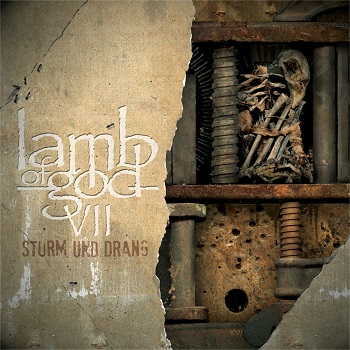