One of the strangest (and most unlikely) success stories of the 80’s was the Stray Cats. Into the decade of massive overproduction, big hair and yuppie dreams crashed three tattooed New Yorkers who played classic old school rockabilly. No synths, no drum pads, just a stand up bass, hollow body guitar and about three drums…and the considerable songwriting nous of mainman Brian Setzer. It also kickstarted a vibrant rockabilly/psychobilly scene over here – The Guana Bats anyone?

And now, on the eve of their 40th anniversary, they’re back, bearing in their tattooed mitts a brand new studio album, the appropriately titled ’40’ – their first in 26 years. Has it been worth the wait? Have they still got ‘it’? Do they still have enough hair for quiffs?

Not to give too much away but it’s a yes to all of these. Recorded in Nashville in a resolutely retro style – namely, on vintage equipment in a room together, actually, y’know, reacting to each other, ’40’ is a blast Daddio – a short but oh-so-sweet collection of 12 3-minute bangers, chock full of licks, quips and kiss curl cool.

It burns rubber and takes off with ‘Cat Fight’ and reintroduces that classic Stray Cat sound – plenty of twang, a frantic rhythm section and oodles of underlying grit. It’s a throw down, a dust up, a rumble, it’s millennial Eddie Cochran and has plentiful cat references. So far, so good.

And it just keeps getting better. ‘Rock It Off’ introduces a touch of raw fuzz to proceedings. Setzer’s voice has aged…in a good way. There’s more gravel and gravitas in the mix now. No longer the young punk, he’s a veteran – he’s been there, man. But make no mistake, he can still wail – ‘I’ve Got Love If You Want It’ showcases his voice, complete with falsetto and emotive trembles.

And man, can he still play. ‘I Attract Trouble’ is a masterclass, a teenage badass hymn. From the introductory Link Wray rumble to the surf guitar breakdown and a snippet of ‘Pipeline’, it’s a joy to behold. Setzer’s knack for writing timeless rock ‘n roll classics is still intact. You almost recognise other, older songs but they’re always just tantalisingly out of reach, and that’s quite a skill.

The final run of songs is a whirlwind of brilliance. ‘Desperado’ is a spaghetti western instrumental, sending nods of respect to Duane Eddy and Hank Marvin while sounding seriously Tarantinoesque while ‘I’ll Be Looking Out For You’ is a full on rock monster, all frenzied guitars, tattoos and chains.

And off they go, roaring off into the sunset in a plume of dust. Fucking brilliant. It’s a wholly triumphant return – energised and dangerous, it’s better than it has any right or reason to be. Hell, it may even be their best album yet. There is less of a pop sheen than before, this is stripped back, consistent and raw and with nary a slow song in sight. Their live dates can’t come around quickly enough. This rocks. 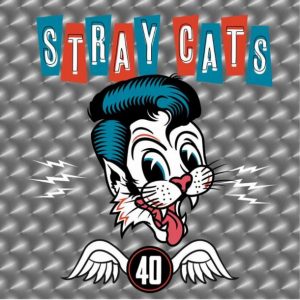