In existence under the name Stratovarius since 1984, there are no founder members left, but lead vocalist Timo Kotipetlto joined them ten years into their run and this being their sixteenth studio album he seems in no hurry to move on. Relying on the not-so-trusty-internet here, keyboard player Jens Johansson joined a year after Kotipetlto, and was also in Blackmore’s recent live revival of Rainbow, while bass player Lauri Porra, guitarist Matias and drummer Rolf Pilve came on board between 2005-2012.

Symphonic metal, come power metal, is their bag, and while I’m not over-familiar with their repertoire I’ve not disliked what I’ve heard before, and with a career this long they can’t be short of fans. However, it’s seven years since their last album, Eternal, and the global economic outlook looks none-too-cheery so those fans are going to need something to put a smile on their face to put with their hard-earned cash.

The environment and humanity’s future are the overarching themes that Stratovarius have brought to the table for new release Survive, and while new millennials revise history so that they’re the only green warriors the world has ever known, old gits like me have been weaving our freak flags on the matter for decades, and so it seems this Finnish band have also made their feelings known previously on the subject in songs over the length of their career.

That’s none too surprising, I still vividly recall reports on how following the nuclear explosion at Chernobyl, with food now scarce wolves were entering Finland seeking reindeer and there was concern they bore radium caesium 250 that might enter the human food chain. With all that’s going on across their borders with Russia’s invasion of Ukraine it’s not surprising similar thoughts can’t be put aside by this rock band.

But preaching doesn’t always work. A good folk song needs a catchy punchline chorus to strike a chord, and gospel at its best swings. Fortunately, Stratovarius bring to the table a set of tunes that blast out, some quite dynamically, with intense precision but mostly with melody too so those of us not seeking a million notes per second. That the songs themselves aren’t literal in their discourse and can be viewed as more tunes about self-empowerment, how united we can stand against anything and over such feel-good heart-thumping ideals holds them in good stead.

This begins with the title track – it comes out the speakers with a riff that’s on a predatory hunt, and as the chorus kicks in with the lines “only the strong will survive,” there’s little evidence of any Greta Thunberg proselytising, unless you coax the odd sublimation from “I will try to find the strength inside.” There’s some scary food for thought here, because one way another aggression’s got to be the answer for this planet’s survival one way or another – be that provocatively antagonist regimes slowly buying or stealing smaller nation states’ land for a future world wherein slavery returns on a scale we’ve not previously witnessed (for those allowed to live), or we use economic forces and reasoned argument to turn the tide of industrialists bent on raping the planet of its resources. But, aside from my happy thoughts, the more localised natural accent of Kotipetlto during the verses, reveals the singer pleading, his frustration, and then a determination of a singular individual expressing himself, while the wider more open chorus exclaims that we need to join forces as an army of like-minded souls for survival to work. That such considerations ride on hellish riffs and a persistent thundering drum might just help knock some sense into a few folks.

‘Demand’ expresses that need to be heard. A swarm of guitars sting in speedy attack, twin harmonies evoking that power metal sound that most of Europe fell for big time all those moons ago when Iron Maiden broke big, that they do so with some deft arrangements here, not a bad thing, here. Military shuffling drums mingling with sharp blasts of guitar and a more symphonic excursion ensuing, alongside dashes of electronica, add colour to ‘Broken’, with this sci-fi styled number continuing to point out “how wicked man can be”, alongside a neoclassical guitar solo going off at hyper speed though still sounding clear and true.

‘Firefly’ is something of an AOR hard rock number, with the odd rhyming lyrical throwback to times gone by, but all given the semi-operatic grand gesturing power metal playing style done with earnest conviction. ‘We Are Not Alone’ again pursues a slightly less mad rush of speeding guitars in favour of a comfier chugging guitar sound, well for the most part; a tune you can picture becoming something of a singalong live. On further playthroughs there’s an understated epic-ness, a brief moment where you think Queen has gate-crashed an Alter-Bridge session, and a longer twin harmony guitar solo.

About now, the disparate but similar elements offered in the various songs thus far begin to form a semi-loose concept storyline, well possibly. There are a couple of tunes that cause a raised eyebrow in part though, like ‘Frozen In Time’ where there’s a somewhat Disney quality in its symphonic opening, and not because of its title, before fortunately opting for chugging guitar melodic rock with a dirty guitar sound alongside a deep barrage of war battling drums. Lyrically, offering lines such as “buried alive forever” when partnered with the previous number’s allusions of how: “we are sprinkled dust among the stars and we are not alone” sounds like some cosmic masterplan based on one of UFO-ology’s old tropes of how crash-landed aliens are buried up in the Arctic, but who knows? Musically, what you want to hear is that in its later section it moves into a sleeker fast-paced climax with operatic high vocals and frantically nerve-shrieking guitar lines.

Voices fade robotically amid electronica, then great waves of chords and rabbit-chasing riffs lash out euphorically as it’s exclaimed that this here planet is a ‘World On Fire’. Now, this might be viewed as a good thing if we take it to be phoenix like rising from the ashes. But basically, if this album’s got a concept at the heart of it, this is the point they’re saying some monumental deed is needed to shift the balance, and with big male voice choirs near end that adds gravitas to the consideration.

Super-speeding klickatty-klakk-klakk riffing and a big choir like chorus act as battle hymn in ‘Glory Days’, more twin guitars soling act as a singular duel, and in this epic they may well be telling, this may be the intended triumphant battle royale, and within such constructs I’ll buy it, though it tends to veer towards the more predictable aspects of the whole power metal fantasy ethos to these ears as a cod-classical opera bit ensues for a wee while.

‘Breakaway’ has a subdued, aftermath feel; a voice sings over bare guitar, until other instruments slowly come in, lightening its gravitas to power ballad bordering towards Disney mode. A song about going away from the herd mentality, one where if the zeitgeist’s right you can be seen as a new messiah, rightly or wrongly, with all the persecution that can bring if you follow the Christian spiritual path.

‘Before The Fall’ surges forth with beefy “Whoah-whoahs” like the sound of slaves pulling weights to build a pyramid, they get higher behind orchestrated sounds as crashing guitar riffs slash out, and in the middle eight: “now the truth will be told” is belted out before the title’s repeated: is this a moment too late as even the oil barons and their bedded partners admit their collective guilts, this listener queries.

The album ends with a title called ‘Voice Of Thunder’ yet it’s a plaintive voice alongside acoustic guitar that plays out. A minute and a half later that’s smashed out of place by crushing chords and a whirling keyboard orchestration. Once more the lyrics hint at messianic salvation, in a first person take, with less of a sci-fi gaming feel and more a religious fever at 11 minutes long and lines like: “I will learn to fly, eternally, in the sky”. It’s broken up around five-minute mark as harmony guitars pitch away towards solo breaking up over classical, semi-prog, and symphonic arrangements, where some mad flight of fantasy fighting might be seen on the accompanying game or animated film should one arise. More earnest later, vocals return with the hook-line chorus, before slowing as vocally it nears a “rusty gate” and climaxes amidst a final feast of guitar soling.

It’s going to take more than a single listen of this album to get the full impact of what Stratovarius is seeking to achieve, if this is indeed the conceptual album that I perceive it to be on the play throughs thus far for this review. That stated, there are songs that will grab your attention from the get-go, notably the singles released thus far. This is symphonic metal performed with skilled craft so much so that it may also appeal to the casual rock aficionado. 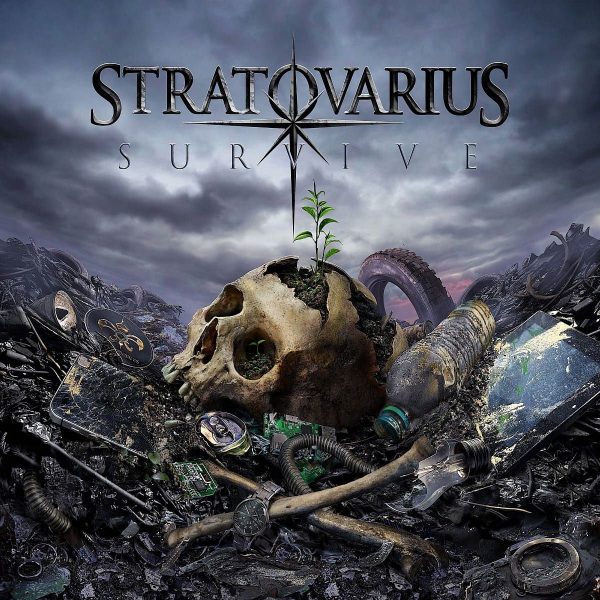