One of the best melodic rock albums of the eighties…

Anyone who is plugged into the history of melodic rock will know the Lenny Wolf story. And indeed the Bruce Gowdy story. Two gifted, driven musicians with talent to burn. Their band, Stone Fury, debuted with the Burns Like A Star album in 1984. The critics loved it, the public not so much.

Thirty Three years provides all the perspective we need to conclude that the critics were right. Probably one of the best melodic rock albums of the eighties, it is undeniably heavy and infectiously, aggressively tuneful. Produced and engineered by the legendary Andy Johns along with Wolf and Gowdy, together they astutely combine rehearsed studio precision with the blood pumping body heat of rock’n’roll, bringing out the best in Wolf and Gowdy’s songwriting, transcending the AOR formula prevalent at the time.

There’s an intense, operatic thread running through the album, from opener, ‘Break Down These Walls’ to closer ‘Shannon You Lose’. It gleams with imagination and inventiveness. It creates adult oriented rock songs in ‘Life Is Too Lonely’ and ‘Hold It’, reaching out for that awesome melodic moment. For nine tracks and 39 minutes it seems entirely within their grasp.

That said, the episodic title track’s dramatic machinations maybe too overwrought for some. A bridge and a chorus too far, if you will. The sound of a band stretching and pulling themselves into rock’n’roll corners that other bands shunned, happy in the safety of their comfort zones.

Elsewhere, a couple of hulking, pile-driving rock bruisers, ‘Tease’ and ‘Mama’s Love’ – channelling Van Halen and The Rolling Stones – show that the duo were just as much in touch with the zeitgeist as they were with the blues based history of rock’n’roll. He didn’t realise it perhaps, but with these songs, Wolf was well on his way to the “Plant plagiarist” accusations that would dog his early work with Kingdom Come.

It’s something of a coup for Rock Candy Records to have got the license to remaster this album. They have done so with customary care and attention to detail. 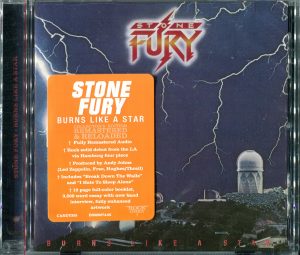