Formed in Belfast over 40 years ago during what is politely referred to as “The Troubles”, Stiff Little Fingershave long been tackling issues that some would, perhaps even most, would like to ignore. Not this band. SLF take the straight-talking approach. For them, veiling lyrical themes in coded language such as metaphors or similes or dressing them up as allegory is to waste time, to obscure or obfuscate what needs to be addressed head on. It’s just punch-in-the-face lyrics that are as good as any poetry. And tonight’s set list is anthem after outsider anthem tackling injustice, authoritarianism, corruption, bigotry, racism, conformity, blind obedience, and all the ills of the modern world.

The lights dim, the intro tape of ‘Go For It’ begins and the applause and cheers go up. Enter Jake Burns and co. and the cheers get louder. ‘Law and Order’ opens proceedings and the crowd are into it, ‘At the Edge’ and ‘Suspect Device’ getting more of the long-time fans moving. Dedicating ‘Guitar and Drum’ to Simon Cowell gets a laugh, and asking what Cowell and Walsh would have made of The Clash leads us into ‘Strummerville’ before Burns introduces the yet-to-be-recorded ‘16 Shots’: “When the police call you up and say your sons been in a bit of trouble, you expect them to say we’ve got him and he’s safe. What you don’t expect is to find out he’s been shot 16 times.” Referring to the murder of Laquan McDonald, this crowd noticeably saddened and angered by the  sobering thought that such barbarity continues to this day. Yep, SLF’s punk does exactly what it says on the tin. And Burns saying“I thought things can’t get any worse, can they? Boy did I get that fucking wrong!” introducing ‘Silver Lining’stresses the fact that SLF are no nostalgia act.

Addressing racism in ‘Harp’ and the covering up of paedophilia in the Church in ‘Guilty as Sin’, the band’s social commentary is as insightful as it is moving and the set’s momentum never once abates. And the sizeable crowd love it. Every bit of it. What’s clear is that the fans know that this band is on their side, the power of guitar and drum their weapon in the fight for the good and the right. And because they don’t want to be ‘Nobody’s Hero’, tonight’s gig is a celebration of exactly that. With not one bad song in their catalogue, SLF are authentic to the bone and have got plenty ammunition to last a lifetime. And tonight’s set was testament to the power of punk done right. See you next time. 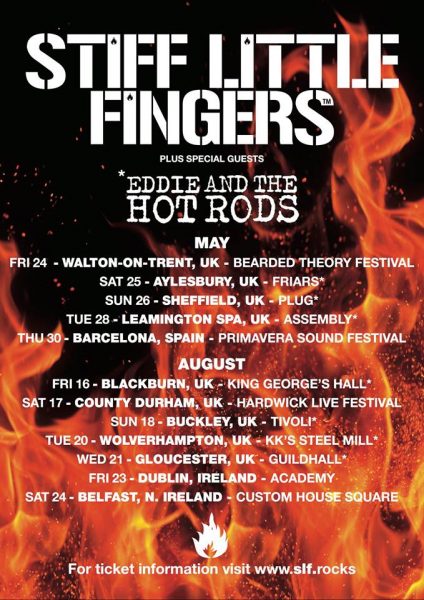