Remastered return of the Space Cowboy

When your Godfather pretty much invented the solid body electric guitar it’s fairly safe to say you’ve got a bit to live up to. Case in point being Steve Miller, whose Ultimate Hits, erm…hits the shelves ahead of a planned reissue campaign of all his albums. Indeed, Millers musical education began with the aforementioned Les Paul and was continued by blues legend T-Bone Walker. No pressure there then Steve!

And so we move from a recorded snippet of conversation between Les Paul and a 5 year old Miller onto the music, and what an intriguing journey it is. And a long journey. The 2 disc deluxe edition weighs in at a hefty 40 tracks including 8 previously unreleased studio, live and demo songs, all compiled and curated my Mr. Miller himself.

We get the full musical story. From psychedelic bluesman into one of the founding fathers of American soft rock. He was perfect for the genre, he wasn’t an iconoclast or in any way dangerous, he relied too much upon the musical blueprints of others for that. He had that slightly bland, inoffensive, plastic persona that was kind of interchangeable with other AOR faces – Seeger, Frampton et al. Don’t believe me? Do you know what Miller looks like? Me either.

But that’s not to say he wasn’t good. Far from it. He channelled classic rock and roll while paying lip service to the hippies and ‘heads’ (he was, after all, a midnight toker). He was the Space Cowboy long before Jamiroquai half-inched the moniker. His bluesy, countrified psychedelia-lite was perfect for the 70’s airwaves and his hits still regularly grace the Radio 2 playlists (Ken Bruce loves a bit of ‘Rock ‘n Me). His deft but unshowy guitar adding the icing to the AOR cake.

He was also (as befits the godson of Les Paul -the originator of multitrack recording) an extremely canny producer, as adept with a recording studio as he is a guitar, which is one of the reasons he has endured. His sound and productions moved with the times. Keyboards, synths and drum machines began creeping subtly but effectively into the mix so that, come the 80’s, he was still churning out hits such as ‘Abracadabra’.

So, for a Steve Miller anthology, this is pretty much all you need. Impeccably produced, classily remastered and damn good fun. Hopefully the forthcoming production line of reissues will maintain this standard. Keep on picking, grinning, loving and sinning you old joker. 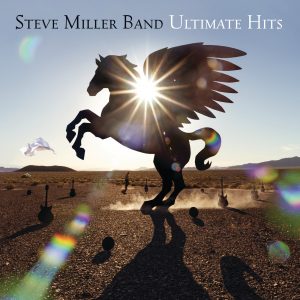