Now, where were we? Oh yeah, LA circa 1989, ground zero at that time for pretty much all things rock. California’s famous smog had been replaced by a thick layer of hair spray and sleaze rock reigned supreme. Many, if not all of the main players had a grounding in punk from the New York Dolls to the Pistols and one of the most vocal bands in their praise and attitude were the reigning kings – Guns ‘n Roses. The Sex Pistols stock hadn’t been so high since ’78. Perfect time, then, for guitarist Steve Jones to capitalise on this and release his second solo album.

And Jones’ timing couldn’t have been better. He was in the prime of what he called his ‘Fabio’ stage – flowing locks, biker chic and low slung guitar. He’d got his tentative debut album out of his system…it was time to rock. And maybe bring some of his friends along.

Everything about this album was bigger than its predecessor. There’s a full band and bigger production – courtesy of Cult mainman Ian Astbury, who also co wrote several tracks and added backing vocals. Within a minute of lead track ‘Freedom Fighter’ (see above) it hits you, cinemascope sound and proper bruising Steve Jones guitar. What also becomes immediately apparent is that Jones’ voice has changed – gone are the West London Elvis stylings of ‘Mercy’ and in comes a full-throated, gravelly American roar. Shagger Jones has clearly booted sensitive Jones into touch!

Jones, in his 2017 autobiography ‘Lonely Boy’, noted that this album was once described as “the rosetta stone of biker rock” and that’s pretty accurate. It’s an album of huge guitars, open roads and leather & chrome sensibilities. There’s no respite, it’s balls out gritty “too fast to live, too young to die” raaawk. There’s the occasional spot of swampy blues but mostly it’s a headlong powerchord road trip. The scenery hurtles by as you hang on for dear life around the bends. The title track, in particular, is a highlight, chock full of crunching, unchained guitar thuggery.

There are a couple of covers amidst the V8 rumble. The Pistols ‘I Did U No Wrong’ sees Jones sharing the mic with Astbury and one Axl W. Rose (who is in fine voice, effortlessly stealing the show) while the album ends with a faithful, if poundingly heavy, version of ‘Suffragette City’ – possibly by way of apology to Bowie and Ronson (whose guitar he allegedly half inched at a Ziggy Stardust gig in Hammersmith).

Oh yeah, those guest stars mentioned earlier? Billy Duffy lends a solo to ‘Get Ready’ because Jones, who was due to play the solo, wanted to go out and party (for party read shag, SJ has admitted numerous times that his prime motivational force is, urm…horizontal activities). There are also co-writing credits for Nikki Sixx and Rose Tattoo.

So there we are, Jones was in a better place, cleaner, more confident, and ready to shag, erm, I mean rock! Embracing and embraced by the LA rock fraternity, he cranked his white Les Paul up to 11 and gave it some bollocks. It’s a fine, if somewhat samey album which leaves you wondering what would have come next if he’d kept the band and momentum rolling. But The Neurotic Outsiders beckoned, followed by the reunion of a certain band in Finsbury Park in ’96. 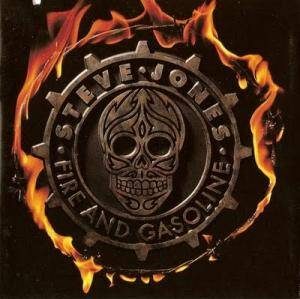