A series of heartfelt blues tracks

Allan wrote this all by himself before the album release on the 6 October 2017 (Ed: yes, he did)

Once described as ‘an overnight sensation that’s 20 years in the making’, it would be fair to say that Canadian Steve Hill is something of an oddity. Calling yourself a solo artist is one thing, but Steve takes things to the extreme and has basically become a one-man band.  In his case, he’s using his feet to play the bass drum, snare and hi-hats and has a drum stick on the head of his guitar to play the cymbals and anything else he can reach, by the sounds of things. This is on top of singing and using an octave pedal to produce basslines, too.  Hell, at one point he even throws in some distorted harmonica, just for fun. One would naturally expect the result to be either comical or an utter mess – but that’s absolutely not the case at all.

In fact, this is some of the liveliest and most fun blues guitar I’ve heard in ages. The one-man-band approach does mean that there’s no excess or filler – you won’t get fancy drum fills anywhere on this record – but what you will get is a series of heartfelt blues tracks to rival anything. You’d swear it was an incredibly tight two or three piece band, rather than just a single guy giving it everything he has.

It’s not stuck in one mode, either – raucous blues-rockers like ‘Damned’ and ‘Dangerous’ sit next to touching and heartfelt acoustic numbers like ‘Slowly Slipping Away’. The guitar work on show is brilliant, too, and tracks like ‘Rhythm All Over’ showcase the versatility of the guitar work with a deft slide solo, and ‘Troubled Times’ brings fingerpicking to the fore, but when Steve throws the Harmonica in on ‘Smoking Hot Machine’ it begins to feel like he’s just got more talent than he knows what to do with.

The advantage Steve has is that, being a one-man band, he has no option but to pare things down to the bone, and that suits his style perfectly. There’s a primal simplicity to it coupled with a frankly ridiculous amount of talent that means every track on this album is just plain brilliant. Whether he’s turning his hand to covers of blues standards (and I’m certain Muddy Waters, Robert Johnson and The Grateful Dead would have approved of the treatment their given here) or writing his own stuff, it’s entertaining and enjoyable.

In fact, my only issue is that this is volume 3, which means I’ve missed volumes 1 and 2.  And, as it turns out, about seven other albums, too. I’ve got a lot of catching up to do – but right now, I just want to put this album back on again. 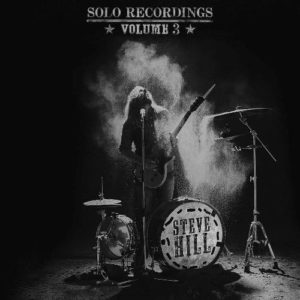