25 years into a recording career, Steve Hill’s garnered himself a prestigious Canadian Juno Award and several blues-related ones along the way. Those on the British Isles will recall his appearance on these shores a few years back, where he performed as a one-man band, guesting on a national tour by King King. A novelty to some degree, one not often seen in many a decade, but nonetheless Hill pulled it off for about just as long, and the resultant boogie-fried rock from the multi-instrumentalist tended to surprise listeners.

This time round, having put the release of new album, Dear Illusion on hold, because of Covid, it now nicely dips into his 25th year anniversary celebrations. He’s no longer flying solo either, with a horn section on board, and someone he met on that King King tour, in the form of their former drummer and seven-times UK Blues Award winner, Wayne Proctor, who plays on six tracks and also mixed and mastered the record. Everything else is played and sung by Hill, who’s also written all the songs, with Joshua Partlett and Johnny Pilgrim supplying lyrics on a good few of those.

‘All About The Love’ opens with strangely interesting spiky-riffs that give way to standard enough stop/start boogie in the verses until several rockets are stuck up backsides as horns join in for emphatic New Orleans hallelujah-styled choruses, while picturing both old time minstrels and strippers having fun. Apparently recorded in both France and Canada, with a horn section from each, you’re never quite sure where this sprightly little number is going to jump to next.

Next up, a harmonica rails on in, guitar chords begin to chug alongside, while horns blow in raised pitch and they all ‘Keep It Together’ in an old hand manner while feeling fresh and upbeat albeit not necessarily going anywhere musically. That sense of positivity continues while hitting a number of highlights in ‘Everything You Got’ that mixes BTO’s ‘Takin’ Care of Business’ with ‘80s ZZ Top and some spangly lead guitar work. There was also a tinge of McCartney in that last one, and the horns follow that through on title track ‘Dear Illusion’ – A real life break-up incident for Hill, wherein questions the reality, truth and otherwise; Proctor’s drumming here feeling like a proverbial kick in the knackers even as Hill’s guitar tries to capture sweeter memories in its melodies.

‘Steal The Light From You’ helps put a smile on our faces with its driving California rock beat, while ‘Don’t Let The Truth Get In The Way (Of A Good Story)’ has the intention of getting somewhat serious. It’s about Donald Trump and might catch the zeitgeist further now that he’s going after the USA’s republican nomination again. While there are some catchy plays on words to be heard, it’s the music that grabs my attention here – there’s about four or five different sections, notably its opening that sounds like Clapton’s ‘Let It Rain’ played by Steve Hackett much as I know that sounds incredibly wrong, there’s a broad section where it could be the Doobie Brothers with the Memphis Horns on board, and it also some other interesting places too with all the joins running a hell of a lot smoother than you’d think.

Slipping in nicely after is ‘Follow Your Heart’ that has a BB King feel without any showbiz schmaltz and then you get ‘So It Goes’ that’s a picked-out acoustic number with evocative slide work played within, all gently sung like a truck driver’s lullaby. ‘She Gives Lessons In Blues’ is superior funky rocking blues, that keeps you hooked with both its narrative and the assorted guitar and horn twists and turns shaking and a rattling throughout.

Does anyone else look at their speakers questioningly when they hear something they think’s not quite right? Well, screw you, I do, and I had to turn the volume louder on this last number, suitably entitled, ‘Until The Next Time’ as Mr Hill plays piano, with filigrees of guitar, warm horns and a serenading chorus affecting the mood similarly. It’s funny, because this, and a few of the other songs on Dear Illusion put me in mind of Christmas – I don’t know if it’s because it that time of year, or simply the chilled goodtime feel that’s on offer though much of the record. Either way, it seems to make sense for it to come out this time of year.

Beyond the boogie, and the one-man band routine, on Dear Illusion, Steve Hill stretches out musically, with some fine arrangements. There’s no need for grandstanding here, just a welcome collection of very listenable songs, and probably some strong live renditions due. 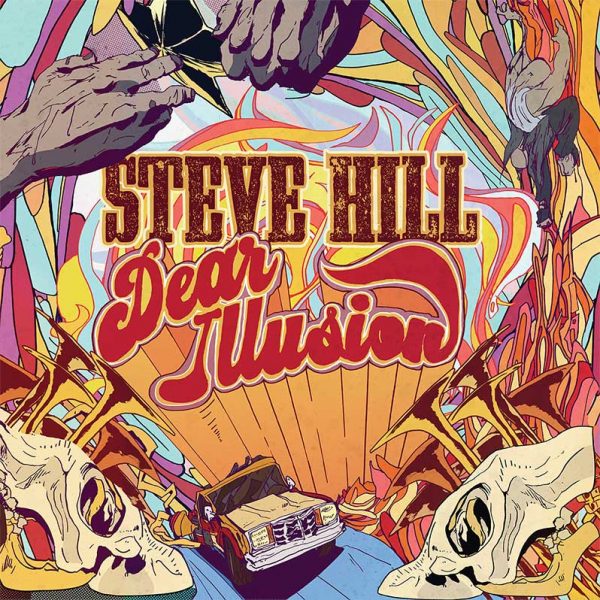