Steve Hackett is currently winding his way throughout the UK on an impressive 25 date tour taking in some of the finest venues and receiving rave reviews. The tour is still set to take in local shows at Northampton Dergnate Theatre and Leicester De Montfort Hall.  Having just released Genesis Revisited Live: Seconds Out & More the live recording of his 31-date Sold Out 2021 Tour on CD/Blu-Ray and DVD, his current tour celebrates another Genesis classic.

The Foxtrot at Fifty + Hackett Highlights tour marks the 50th anniversary of the legendary Genesis album Foxtrot which, in 1972, was pivotal in establishing the band as a major force in British rock.

“I think Foxtrot was a terrific achievement for Genesis at that time,” says Steve Hackett. “I think there is not one weak track on the album, they all have their strong points and I’m really looking forward to doing the whole album live.” In 1972, Genesis hit the studio to work on the new album without a break from a massive worldwide tour. “We were a touring band; we were all young guys, we were fit, we punished ourselves with that kind of behaviour and we were recording somewhat piecemeal.”

Steve continues, “We had the luxury with the previous album, Nursery Cryme, of taking time off and concentrating on getting an album right. However, we didn’t have that luxury with Foxtrot. They were all young guys too and they were getting really excited about what we doing. There really was something about it.”

At the time of recording it had been rumoured that Steve wanted to leave. “I was involved in a stormy private relationship and that, for me, was a huge distraction from the band. I was used to being in situations with bands that didn’t last that long and, particularly with Tony (Banks) and Mike (Rutherford), I got the feeling that they disapproved of what I did to a large extent. Until I got that seal of approval, on the first day of recording Foxtrot they both said to me: ‘We want you to stay, we like your playing,’ and I thought ‘This is news to me, this is good news, so I had better stick around for a while’.  Looking back, I guess that Genesis was more reserved and I think that reserve could quite easily be misinterpreted as disapproval. So, we did stick it out altogether and I have to say that I am very glad that we did.”

“Some albums are more difficult to make than others and you have to remember that this was the second album that we had made with the team comprising the Charterhouse guys, Phil (Collins) and myself. So, we were a newly formed five-man team. Some four hundred tour dates later, we were still very much a new song writing team together. I look back on it all rather fondly, I just wish that some of the album sounded as good as it did live, in particular Watcher Of The Skies.”

With the tour being billed as ‘+ Hackett Highlights’, Steve gives an idea of what to expect; “There will be some things that I have been wanting to play live for some time, songs that I personally think are very good.  I feel that it is now time for me to showboat a few of those songs again. Plus, there will be some Genesis tracks that I know people are going to want to hear. I would like to do The Devil’s Cathedral again; we recently played that live and it just seems to be getting better and better all the time. I think that all in all, it is going to be a very good show. “

Tickets for Steve Hackett Genesis Revisited – Foxtrot at Fifty + Hackett Highlights are on sale from hackettsongs.com and myticket.co.uk 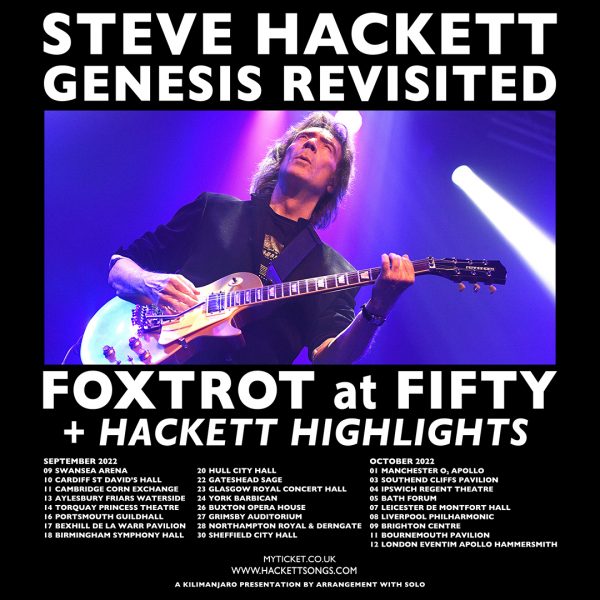