Experiencing Steve Hackett revisiting his years with Genesis has become a regular occurrence over the past few years with each tour given its own unique twist. This time around is no different with the musicians accompanied by the Heart of England Philharmonic to provide a wonderful orchestral backdrop over which Steve and his superb band were free to weave their magic.

A dramatic ‘Dance on A Volcano’ started the show and it was clear the the orchestra were going to perfectly complement the band; at times it was easy to forget they were even there such was the natural way in which it all blended together. Long serving vocalist Nad Sylvan has been warmly accepted by fans of old school Genesis and his voice is heard with astonishing clarity all around the luxurious setting of Symphony Hall.  Not that he is the only featured vocalist with drummer Gary O’Toole taking over the mic for his now customary rendition of ‘Blood on the Rooftops’, accompanied of course by some delicate acoustic guitar playing from Mr. Hackett.

Although the show was billed solely as an evening of Genesis music it is two instrumentals from the Hackett solo catalogue that provided outstanding highlights; the muscular, tubthumping rhythms of first half closer ‘Shadow of the Hierophant’ and the galloping tribal beats that permeate throughout ‘El Nino’ were equal parts powerful, moving and sublime. Both are given an extra kick courtesy of Swedish bassist and guitarist Jonas Reingold (from The Flower Kings), a recent recruit to Hackett’s band he has proven to be a solid addition and as a self confessed fan of Gabriel-era Genesis must surely be having the time of his life. As for the band leader it is pleasing to report that the maestro himself remains in outstanding form and his exquisite solos on ‘Firth of Fifth’ and ‘Suppers Ready’ were delivered to the highest order. An encore of ‘The Musical Box’ rounded off another peerless performance from all concerned. 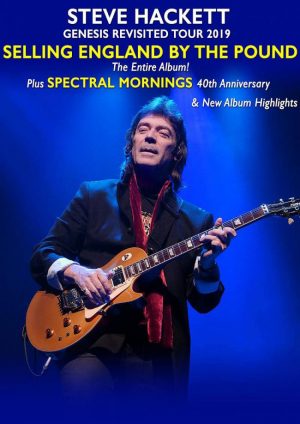 The good news to report is that we only have a little over twelve months before Hackett and Co return to Symphony Hall. Tickets are already on sale for shows in November 2019 that will find Steve celebrating the fortieth anniversary of Spectral Mornings in addition to highlighting new material and performing Selling England By The Pound in its entirety. Check out www.hackettsongs.com for the full list of dates.

Dance on a Volcano

Out of the Body

Dancing With the Moonlit Knight

Blood on the Rooftops

Shadow of the Hierophant

…In That Quiet Earth